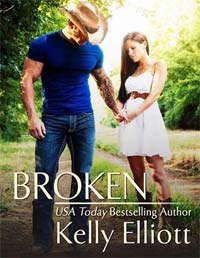 My thoughts on Broken

I really enjoy reading this New Adult Romance with a double point of view, one from each of the main characters (Layton and Whitley). It was easy to read, kept me smiling most of the time and wanting to read more.

My favorite character was Courtney, Whitley’s best friend. She was crazy as you can’t even imagine, outrageously funny and the things she said to her friend kept me laughing. Mix that with the fact that the girl reads books for a living and she got me good. The story was not about Courtney though, that will come in the 2nd book of this trilogy (so far).

Layton was another character I enjoy, not only for his good looks and the fact that he was not a man to break a promise, but because he was not afraid to let the tears go and cry if it was necessary. From joy or sorrow, either way I love it because it makes him even more beautiful in my eyes, more human.

I couldn’t put it down. It kept me interested all the way thru the end of the book and I have to say, even when it was a little corny at some point, the author made a hell of a job with this book and I want to read more of what she had written.

Buy the way, the book that was mentioned in this novel, the one Courtney gave to Whitley to read on her kindle. Look it up! It’s on Amazon and O-M-G!

Not the entire book was amazing, the story of course it was but there were a few things I didn’t like very much. The romance develops too fast, like a love-at-first-sight-but-I-will-not-accepted kind of thing and not very realistic for me. I had not even notice the pass of time if the author had not mention it here or there. I didn’t like the repetition and the winking. I don’t know if in Texas the cowboys wink a lot but it was a little too much for my taste.

Something else that bothers me was the fact that whenever Layton and Courtney touch in any way they felt this “electricity” between them. I’m sorry to say but there it’s only one book that I remember has the same description that happen between characters and I’m not naming it because I don’t want people killing me. And adding to the unrealistic part was that fact of “I knew you were the one since the moment I saw you for the first time” talks. Romantic, yes, but really?

I guess I was looking for a little more realism in this novel and forgot that it’s a New Adult Romance, not a real life romance *laugh a little* Also I was looking to see how the pieces of both broken characters were glued back together but I didn’t felt that pain that comes with being broken so badly for the things that happen to them. I did feel the love thou and that was good.

If you like cuss words, hotter than life cowboys, ridiculous bets between friends, fights that had no reason what so ever, stupid decisions and love, so much love (and sex).

What are you waiting for??
I can even tell that if you get to the very end of the book and you don’t want to read the second book of the series you are insane, my friend, you are crazy. Because… well I can’t ruin the end for you but DAMN! I want to know so many things and trust me, so will you 🙂

There was only one quote that stuck with me besides all the normal romance “I love you” kind of quotes. It was what Layton said to his ex-girlfriend, Olivia. I remember because I thought “WOW. That it’s deep. I’m amazed that he knew the difference already and told her that”

“We weren’t in love. We were in lust“

If not then go find it (if you want to, of course)!