*Scratch her chin for a few seconds, pondering how to start this review*

Honestly… I didn’t remember this book until I saw it on my Amazon Wish List. It took me a few days to finally purchase the Kindle format of it and I did it because I said to myself “It has 410 pages according to Amazon, it has to be worth it no matter what“… You’ll see… I’m not afraid to admit that sometimes I can be a little special to spend my money, not saying I’m cheap or something but I think too much when it comes to spending money. This book, was worth it, not a doubt in my mind about it. 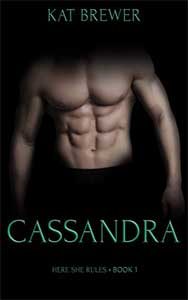 A Trans-dimensional rift takes Cassandra Powell to a foreign world where she finds herself in the country of Erla, a Queendom ruled by women. After saving the life of Erla’s queen, Cassie finds herself elevated to a position of power in the new world she discovers she can never leave. She is bestowed honors and a bevy of beautiful male slaves who live to serve her every desire.

She soon finds herself at war with brutal enemies as well as with herself as her entire view of life and what is right and wrong undergo a dramatic transformation. Determined to make a place for herself in the new world, she learns to embrace her situation discovering the pleasures to be found in the arms of the beautiful men that now belong to her, body and soul.

My thoughts on Here She Rules

First and foremost I want to say I usually don’t enjoy books that happen in the past or in historical times. I don’t even remember reading time travel themed books, but this one… Oh… my people… this one… I just enjoyed way too much 🙂

Cassandra is our main character in this book. A martial arts instructor that it’s sucked into a portal and ends up in a different world, where females are the leaders of society and males are servants to them in every way, shape and form.

She lands into a queendom (ruled by a Queen instead of a King) and unknowingly saves the Queen from some female barbarian attackers. Because of this and her knowledge of a fighting style that they don’t know, she is turn into the Commander of the Queens army, a rank that means only the Queens orders are above Cassie’s.

Cassandra or Cassie has a strong will. It’s able to do a lot of things and get into the life style, not so easily but more so than others would. What bothers her the most was the difference that in this world, gorgeous (and I mean it) males were at her disposal and she got 3 male slaves to start. End up with 6 by the end of the book and just let me tell you, the way she pick them was so good that I was amazed, not by they looks, more about their personalities or situations.

The world was not difficult to understand. Around the Queendom where Kingdoms but most of them where in good relationship with each other. Not all of them but if all was happy there would not be a reason to have 410 pages of novel (according to Amazon page count).

I’ve read some reviews on Goodreads or Amazon that complained about the turns that the book has and how unpredictable can be. I don’t agree with those reviews and let me tell you why: If you look at someones real life, specially a warriors life, you would expect them to get wounded and have to heal, to make mistakes, to end up in bad situations, to even fall from their horses now and then.

That’s what happens in this book. It’s a long read, I’m not gonna lie about it but at the same time, there is not a single boring moment and for me to keep reading a book like this and for the extension of it… It has to be good and it was. When things started to settle too much, the author gave a twist you would NOT expect.

The first plot twist that got me so flabbergasted was a kidnapped. I was expecting the kidnapper to be certain Prince and it turns out it wasn’t!! My eyes bulge out of my face when I read who actually did it. It was like “What the hell?? How? What? When? I did NOT see that coming!!!”

The Romance was a little jumpy in some ways and steady in other ways. I can’t mention much about it because I would give away too much. What I can tell you is that the ending was so beautiful, bitter-sweet (in my opinion) but beautiful. I just melt when I got to the end of the story and at the same time I wanted more.

The writing style it’s simple but at the same time goes perfectly with the time period that the world seems to be in. One where they didn’t have electricity and things like that. The words were well thought out and I like it, because it wasn’t incredibly heavy to read and I could pick most of the things the first time instead of having to look them up (have in mind I’m not from an English-speaking country).

Oh my Lords and Ladies, Yes!

If you like time travel stories and are into some adventure, woman controlling the society for the most part and some eye candy man who will do anything to please you… I would say this is the book for you.

Also, a word of warning, there most likely be some Prince’s fighting over your attention too 😛

““You are so good for my ego.” She said and pressed a kiss to his forehead. “Yes my Mistress, I will be good for anything you desire” “

Another 5 stars book… The only reason I will give you, after you have read my review above it’s that I throughly enjoyed this book at his full potential and I’m considering purchase the other book that the author has on Amazon *looks at the stars* I hope she keep up with my expectations though… even considering that this was her second novel…