For almost 6 days I kept looking and looking at my book TBR (to be read) list and I couldn’t pick a book to read. Even though I have a lot of them that I want to read for reviews, I couldn’t pick one, I was just not in the mood. So instead I went to my phone and look at the audiobooks I had there for a while now and decided to listen to this one.

Finished this book at 1:07 am on Friday 25th of September 2015… And I can not explain to you how good I felt… So for the first time in this blog I will make a review of an audiobook. This audiobook. 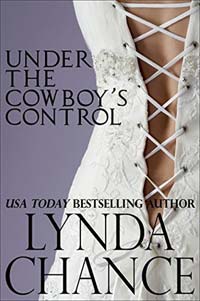 Under the Cowboy’s Control

Selena Taylor is an American citizen determined to find her grandparents after she loses her family to the violence of the drug cartel in Mexico. Crossing the border into Texas turns out to be the easy part.

Virtually penniless and enticingly innocent, she soon finds herself at the mercy of Travis Blake. Travis is a hard-working, self-made rancher that has never known love or softness of any kind. His only use for women is sexual, and Selena is caught on his ranch with no way out.

While Selena plots her escape from his control, Travis ruthlessly and methodically tightens his possession and makes it impossible for her to leave.

The struggle that follows is a clash of wills that pits purity against passion, virtue against vice and love against lust.

Under the Cowboy’s Control

Once I started this book in audiobook form it was harder than you may think to have to pause it for things like studying (which I didn’t) or to eat or help my mother if and when she called me to do this or that around the house.

Granted, the book only last 5,5 hours but with all the interruptions… Well you can guessed it took me more time than that to finish it.

The narrator was Emily Beresford and let me tell you she did an amazing job with the voices of each character and the picture she put in my head of the story and all was fantastic.

Travis… what can I say about that man? Damn! He is sexy, he has brown eyes, for a change, not blue or green, brown! Hell Yeah! Don’t get me wrong, I like those other colors but sometimes it’s great seeing something normal in a gorgeous man. Also he has a strong will, he is human, very human, also honest but at the end of the book I wanted to slap him… for a good reason… His thoughts were just… ARG!.

Selena was a real angel and I should write that in capital letters to make her justice. She put up with a man like Travis in a country that was very much new to her, not being able to speak fluent english and with a family upbringing that made me roll me eyes just a little bid. But she manage to make him stop a lot of times, she manage to make him think and she manage to get into his thick skull at the end, and the way she did it… boy she was AMAZING.

The story was about this girl who cross to the US from Mexico to look for her grandparents because her family was killed by the drug cartels. She end up on a ranch, being confuse for a boy because of her looks and then protected by a possessive cowboy that wants her but manage to control himself. Selena gain the love of all the ranch hands and this drove Travis nuts with jealousy. She was as pure as they can be and the way the love between them, Travis and Selena, was build was slow, steady, sweet and so real. It’s a love story with a happy ending and a heroine that can teach her cowboy a thing or two about love and relationships.

I can’t talk about the writing much because, let’s be honest here, I was lost in a cloud of ecstasy and happy fluffy feelings listening to this audiobook, with a smile so big that I thought my face was going to crack at some point. But what I manage to pick up, thanks to the narrator was that if I had the book in my hands it would be easy to understand, not complicated at all and very good for someone new to reading in english for sure. At the same time, I prefer the audio in this case.

The characters felt real and honest to the core. Travis was a little old fashioned in his way of thinking and so was Selena but, in their defense, I have to say that it’s normal for cowboy’s stories and very religious characters, like her parents, to be raised and believed that marriage has to come first.

It was a shock not finding the plot twist that my brain was creating while the book was being told to me but at the same time it was very refreshing to realise that I didn’t need kidnappings and excessive drama to love a book and have a huge stupid grin on my face for hours on end… even now I’m smiling just because of the memory.

Do you enjoy cowboys that have a very possessive way of being and very strong core values? A heroin that goes thru a lot to be free and ends up finding love in the most stranges of places? A little less drama than usual? Something just sweet that could be the very life of someone you may know? This is the perfect book for a romantic ride… and if you listen to it on audio, it’s even better… in my opinion.

“He stalked toward her. “Really?” He reached down and swiped her wrist and held it tightly in his grip. “Really? You don’t get it yet? You haven’t quite figured it out? I told you what happens when a man wants something he can’t have. Have you forgotten so soon? Are you saying I can have it? Are you? I tell you what, Angel, you let me take you back to the house, strip you naked every night. You sleep in my bed, and we’ll see just how nice I can be.” He slammed his mouth down on hers.“

“His gaze broke away from them and went in search of her eyes. What he saw there, humbled him.
Trust. She trusted him to do what he said he would.
Just kisses.
Holding her eyes, he lowered the shirt and covered her breasts, but left her slim white stomach bare. He put his hand there possessively and covered her mouth again with his. He drank from her like he was a dying man and thought he would be if he couldn’t have her.“

“Her mother had neglected to tell her about how hard it would be to say no. She had never told her about arousal or desire or how intense the feelings would be.
She had always made it sound so simple. Just say no. Well, it didn’t always work out like that. Suddenly, she understood why girls became pregnant out of wedlock.
Bad girls weren’t always bad. Pregnancies happened.“

*smiles like she is high on something fluffly* I just loved this story so much. It was so refreshing, so good, so amazing, so something I will be re-hearing over and over again. I can’t even believe how much I loved this and it reminded me of a time when I believe men like that could exist. Like in my mother and father’s time, when they meet and how things where and all that… *sigh* Sooooo romantic (*-*)

HAVE YOU READ THIS BOOK?

READ IT AND COME BACK SO WE CAN TALK ABOUT IT!