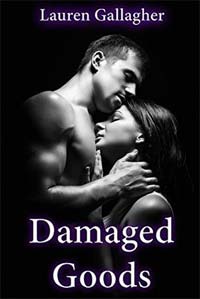 Jocelyn Rhodes is a single mother with a demanding career and a long-neglected libido. Frustrated with the dating scene and way overdue for some satisfying sex, she takes a friend’s advice and hires Sabian, a deliciously sexy escort. He’s well worth the money, and the sheets haven’t even cooled before she’s ready to call him again.

The more time she spends with him, the more she realizes she and Sabian have more in common than she thought. She’s a single mom, he’s a prostitute, and when it comes to dating, they’re both damaged goods. To most potential mates, Jocelyn and Sabian are in a category akin to dented soup cans, but if the two of them can look past each other’s respective dents, they just might find something they’ve both been missing.

But even if they do find that something, how on earth can she make a relationship work with a man who sleeps with other women for a living?

My thoughts on Damaged Goods

First, I wanted to say that I picked this book precisely because it touches the topic of male escorts. It fascinates me. It makes me curious about it because until 2 years ago, the idea that males could or would do this kind of thing was just crazy… Females? Yes. Males? No way!

I fell in love with the characters pretty fast and Sabian, as they called him, it’s pretty amazing himself. I can’t have picked this two better, if I may say so. The chemistry between them was just so right and the way the situation was developing was so well done that I don’t have any complains at all.

Jocelyn it’s a divorced mother that lets her friends convince her that to stop her dry spell, she should hire a male escort… and she does. The first time they meet was a train wreck of nervousness for her after he took control and showed her that it didn’t have to be a bad thing at all.

Sabian is a man that has a passion but he does not enjoy his job anymore, at least not the escort thing, the problem is that he needs the money because his real passion does not give him enough to eat or other things. When he meets Jocelyn his world started to change. She wants to talk. She listens to him. She treats him like a human and not like a way to satisfy herself in bed.

The relationship develops during the book and I have to give it to the author, she was great because the romance was not a love at first site, really. The trials and problems they both have to confront were real, were stuff that you have to go thru every day probably or most days.

What made this book end up in my favorite list it’s that the open mind of Jocelyn was at war with society, with the things people consider correct, moral even. Responsible parents don’t date escorts, period. But she fights against this and the moment that drove it home was the scene where she confronts her best friend about the fact that this so called friend doesn’t see Sabian as more than a paid whore.

Another point, and reason why I love this characters so much, was Sabian and his insecurities. Those were so real to me that I was stunt in silence most of the time reading this book. He said at one point that he wanted to have children and get married someday, but he didn’t believed it was possible, because what woman would want to marry him? Even if he left the escort business (which he did), he thought that because of his past he was just doomed.

I mean… How many women think this daily? It’s a struggle and it’s hard but this book shows so many things… It’s a huge eye opener if you are ready to open yourself and listen. I would definitively re read this, if only to keep my mind open to possibilities that I never thought about.

“It’s been ages since someone had kissed me like this. Tender, unhurried, like neither of us had anywhere to be or any reason not to just melt into each other.“

““I’m not selling myself”, he said matter-of-factly. “I sell a service, use my body to give that service.” His fingers curled against the small of my back, drawing me closer to him. “And afterward, I leave with just as much of myself as I came in with.”“

““So if a guy came along with not a lot of money and couldn’t take you to five-star restaurants, you’d still consider him relationship material? Or if he didn’t give you the jewlery you wanted or fly you to Jamaica, would you still fuck him?”

She glared at me. “That doesn’t mean he’s paying me for sex.”

“Then what does it mean, Kim? Where’s the line?” I took a breath. “Just because he doesn’t give you cash doesn’t mean it’s not what you’re doing.”“

Lauren Gallagher is an abnormal romance writer who has recently been exiled from the glittering utopia of Omaha, Nebraska, to an undisclosed location in South America. Along with her husband, a harem of concubines, and a phosphorescent porcupine, she remains, as always, in hiding from the Polynesian Mafia. For the moment, she seems to have eluded her nemesis, M/M romance author L.A. Witt, but figures L.A. will eventually become bored with the wilds of Spain and come looking for her. And when that time comes, Lauren will be ready. Assuming L.A. doesn’t have her hands full keeping track of Lori A. Witt and Ann Gallagher, which she probably will.