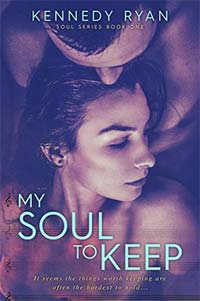 My Soul To Keep

I had two things in life that mattered. My mother and my music.

Mama was taken from me too soon, and now music is all I have left. It’s the thing that’s pushed me right out of backwoods Georgia into Los Angeles, where the line between fantasy and reality shimmers and blurs. I’m finally making my way, making my mark. I can’t afford to fall for one of music’s brightest stars. Not now. Music is all I have left, and I’m holding on tight with both hands. I won’t let go, not even for Rhyson Gray.

I had one thing in my life that mattered – music. The only constant, it’s taken me to heights most people only dream about; a gift dropped in my lap at birth. I thought it was enough. I thought it was everything until I met Kai. Now she’s all I think about, like a song I can’t get out of my head. If I have to chase her, if I have to give up everything – I will. And once she’s mine, I won’t let go.

My thoughts on My Soul To Keep

Did you ever read a book that has you hanging on 99% of every word on the page? A book that, if you have it in paper form would be so full of highlights and sticky notes that only you knew the reason for. A book that when you jump a paragraph to go faster, actually make you stop and go back looking for more highlights or things to mark with sticky notes. This was THAT book to me.

Kai was an amazing female. She has an inner strength that I have no words to describe and also she is very focus on what she wants and how she wants to achieve it. I’m really proud of her for that. She stuck to her ways all the way thru and I can’t express enough how that made her even a better person in my eyes. Not only did she help her aunt after her mother died to pay for the bills but also, she has ethics in all the things she choose to do.

Rhyson was a character that from the beginning was very real to me, in a way that guys are just like him. He does not understand why Kai won’t go out with him. Why she wants to be just friends? Why she doesn’t want him to pay for her bills or support her? Why does she want to do it all on her own? For him that does not make since, and he is such a guy for it.

I fell in love with the writing style of Kennedy Ryan. I have no words to express how much I enjoy reading her book and I ate up every little detail. Not only her writing it’s fluent, stylish and pure awesome, but to my ears was like poetry. I don’t remember, at this point in time, any book that has this kind of effect on me because of the writing alone. Add the story to it and I’m done.

The development of the characters throughout the novel was outstanding for me. Steady, with time very well done and it didn’t felt like dragging to get from one point to the next. She made me feel like I was reading a private journal of the relationship and how things came to be. I’m just plain in love with this book and this author right now.

The ending was beautiful. Rhyson could have gone without that shit that he pull-off but he is a guy, he doesn’t understand, he wanted to protect her the only way he could. Yeah, he screwed up but I can understand him. I’m glad she put her feet down and told him like it was. I hope she doesn’t get too hurt, because I’m sure life will give her a lesson on tour.

I can’t wait to read Down To My Soul!

“I’ve been hurled into an electrical storm. My brain is charged and my thoughts are icy water suspended and trapped in my head“

“She was not just prickly last night. She was full-blown cactus“

“Death takes more than just the one life. It fhieves tiny particles from the ones left behind until you feel only half alive“

“God of the joystick, give me patience“ 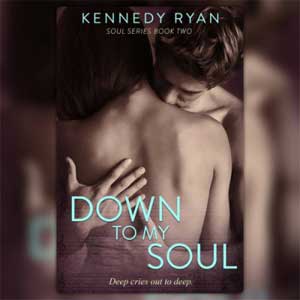