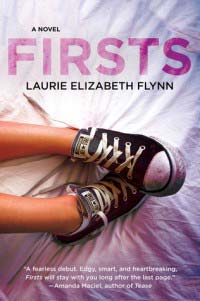 Seventeen-year-old Mercedes Ayres has an open-door policy when it comes to her bedroom, but only if the guy fulfills a specific criteria: he has to be a virgin. Mercedes lets the boys get their awkward, fumbling first times over with, and all she asks in return is that they give their girlfriends the perfect first time- the kind Mercedes never had herself.

Keeping what goes on in her bedroom a secret has been easy- so far. Her absentee mother isn’t home nearly enough to know about Mercedes’ extracurricular activities, and her uber-religious best friend, Angela, won’t even say the word “sex” until she gets married. But Mercedes doesn’t bank on Angela’s boyfriend finding out about her services and wanting a turn- or on Zach, who likes her for who she is instead of what she can do in bed.

When Mercedes’ perfect system falls apart, she has to find a way to salvage her reputation and figure out where her heart really belongs in the process. Funny, smart, and true-to-life, FIRSTS is a one-of-a-kind young adult novel about growing up.

My thoughts on Firsts

Warning: This review has spoilers on it

When I first heard about this book it was still 2015. I saw it on a youtube video, where a girl was showing her advance readers copy and telling the release date of the book, along with the synopsis. I was curious about the premise so I set a notification for the release date in January.

It took me a while to be able to pick this book up and read it. Why? I’m not usually into reading YA (Young Adult), in case you haven’t check around this place *smile* you will get what I’m saying after you take a look.

Now… Onto this review.

This is a book that left me confused and fighting with my own ideas almost through the entire thing. I mean. Seriously, I told myself this while reading: Why is OK for a guy to do this very same thing, but when a girl does it… it seems so wrong… She is not doing something that I haven’t seen at least 50 boys on books do… but she is a girl, damn it!

I have to say that it was a realistic book. After I finish reading and had a few days to cool my brain off, I notice it really is realistic. When we are teenagers, we don’t see the wrong in our ways, usually until it’s too late or we are old enough that experience has shown us different. So the fact that this character thinks she is doing a favor to other girls, by taking their boyfriends virginity, and teach them how to pleasure their girls for their first time, it’s not so far-fetched. Actually, the author it’s freaking brave to put this in a debut novel.

Mercedes it’s a complex character. Sometimes I hated her and sometimes I feel bad for her. She has a strange mother that doesn’t seem to care about her much, she has an absent father and she had a fucked up first experience with a man sexually. Having this last detail in mind, is that she decided to “help” other girls by taking the time and effort to “teach” their boyfriends how to treat them the first time they have sex. She honestly thinks the girls should be thankful because they will have a good experience thanks to her.

I saw a huge amount of warning signals and thinks she shouldn’t be doing if she didn’t want to be discovered. She thought she could sleep with a number of guys, from the same high school and nobody will know. She wrote down names, dates and even scores for each guy on a notebook that wasn’t very well hidden! *roll eyes heavenward* She doesn’t see the wrong of things, until a little later when she start to think “what ifs” in regards to the boys. What if they were searching for her just for the sex? What if they were not really virgin boys? Duh!

Besides the doubtful parenting skills of Mercedes mother and the fact that she was alone a lot, we have another delicate matter in our hands, religion. Mercedes best friend it’s a religious girl, that comes from a religious family and even makes her go to some Bible study classes with her. Even with all this details, Mercedes struggles with keep doing what she is doing while hiding it from her best friend.

Angela, the best friend, it’s not only religious, she also has sworn to be celibate until marriage and her boyfriend it’s not exactly happy with that idea. He thinks Mercedes supports his girlfriend idea of waiting to be with a guy until she is married, which Mercy doesn’t understand but she will support her friend in her decision. Angela’s boyfriend it’s the asshole that outs Mercedes in the public eye.

Time to talk about the sweet guy that it’s with her no matter what and that she is too freaking fucking blind to see: Zach. He is a sweet boy. He is the fuck-buddy and the only regular in Mercedes schedule of guys. He is her lab partner, the only boy who understands her and really cares about her. Zach’s the guy that when the water it’s boiling and spilled over the casserole, helps her to get away without being completely burned to death.

If there is one thing that I can say that I truly loved about this story it’s the loyalty between friends. Faye was new at Mercy’s high school but they became friends, and that friendship was very strong. Angela and Mercy had their problems but when things cool down, they got a little better, even when they knew it would probably never be the same.

Mercedes had a huge amount of problems because of what she did. Every action has a consequence, and we are not to take that lightly at any given time because we don’t know when that can come and bite us in the ass.

All in all this was an amazing debut novel from Elizabeth Flynn and I would want to see more stories by her in the future. She has my respect for daring to publish a debut novel with this kind of subject and situations in the storyline, because I don’t know if would have had the ovaries to do it.

Lastly, this is definitively a must read for a bunch of people I know. Why? Just for the amount of highlights and quotes that I got from this book, but not only for that reason. This book will teach or remind you of some values that we take for granted and things that are important for a persons growth. I believe that any teen that reads this book and can see it not only as an awesome read, but as personal tool for development, will get far ahead of anyone that fail to see the little important details about Mercedes story.

“Did you ever stop to think it might be whores like yo who put every nasty bit of their ugly shit out on display for the world to see that disgust me so much I feel the need to cover myself up so I don’t wind up single, with seven kids, barhopping every night when I’m well into my sixties?“

““Don’t you mean I still look hot?” I say, throwing my coat on the floor. “Looked implies past tense”.
“Your level of hot is omnipresent,” her says, coming up behind me and biting my neck.“

“I have no doubt that when I meet my end, I will descend into the hell that’s been saving me a spot in its torturous embrace since the day I was born. I also know that when I get there, I’m going to spend my time finding Owen and killing him over and over again“ 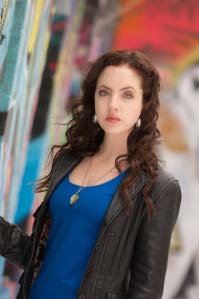 Laurie went to school for Journalism, where the most important thing she learned was that she would rather write made-up stories than report the news. She also worked as a model, a job that took her overseas to Tokyo, Athens, and Paris.

Laurie now lives in London, Ontario with her husband Steve, who is very understanding when she would rather spend time with the people in her head. Laurie can mostly be found writing happily at her desk, with the world’s most spoiled Chihuahua on her lap. Laurie drinks way too much coffee, snorts when she laughs, and times herself when she does crossword puzzles.

Laurie is represented by the amazing Kathleen Rushall of the Marsal Lyon Literary Agency.