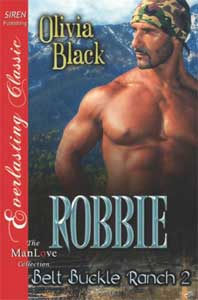 Published: May 26th 2014 by Siren-BookStrand

Robbie Robertson owns a motorcycle repair shop. His business is failing, bills piling higher than his bank account. When a P.I arrives with a manila envelope, everything changes. Reading through the documents, Robbie soon realizes that he isn’t alone in the world. He has a father living in Colorado that wants to meet him. Robbie decides then and there that it’s time to close up shop for good and head to the Belt Buckle Ranch.

Cody White has been living and working at the Belt Buckle Ranch for five years. He meets Robbie the moment the guy steps out of his truck. It doesn’t take long for the two men to jump into a sexual relationship. His craving for the big, tattooed Adonis grows as they spend time together. But when Robbie’s injured working on the ranch, Cody blames himself and pulls back.

My thoughts on Robbie

Olivia Black is one of my all time favourites MM (male/male) romance writers. I’ve read most of her stories, except for this series and I’m correcting that now, because I’m reading The Belt Buckle Ranch Series and this is the second book in said series.

Robbie is a mechanic that always wanted to own his own mechanic shop, but he was horrible with numbers so his shop didn’t do well. He was drowning in debts and sooner or later somebody would come and take it all from him.

When a private investigator came into his shop and delivered a manila envelope, what was in it changed his world. Now he had a father that wanted to meet him, so after a little thinking, he packed everything up and left for good. His destination, The Belt Buckle Ranch.

Cody was one of the hands that work at the ranch and when they saw each other, Robbie and Cody, the attraction was there, no doubt about it. They did what any person with interest in another and little bit of brain would do, right? They had sex and started a relationship.

Robbie as a character was good because of his past, the need to belong somewhere and the fact that he didn’t have anywhere else to go. Also he was smart and worked hard along the other men at the ranch since his first day there, proving that he was not only wanting to stay but that he was willing to learn how to do the work.

Cody was a sweet boy. I felt him more like a young man, which he was, but the feel I got from him was that he was not mature enough or something, like he kept something from his teenage years. It fit his character well, I’m not complaining, just commenting.

The relationship between the two men developed good and steady, even when they both had their doubts, and the steamy sex was drool worthy between them, when they got a chance to grab each other between work hours *smile*

The accident that Robbie had, was horrible. I couldn’t have imagine the pain he was in. But Cody’s reaction to it made me angry even if I understood the guilt that made him act the way he did. He should have stayed at Robbie’s side.

The bond between brothers is getting stronger in this book and I love it, it’s amazing how someone you didn’t knew existed can care about you and surprise you. Learning to trust someone else beside yourself can get tricky.

One thing that Olivia does perfectly for me is getting the reader involved in the side characters of each book, that will turn into main characters of their own books. In this case in particular, I’m talking about Jared and Oliver, Robbie’s brothers.

I have a thing for wounded men and Oliver fits that bill like you have no idea. I’m dying to get to his book, that I just realized it’s the last in the series so far. That means I need to hurry my ass and read faster *laughs out loud*

The story was sweet. Kept me turning pages from start to finish. I had no issues with the writing what so ever. It was 15 chapters long with around 30,000 words so it’s not long or trying to read in one sitting. Most of Olivia’s books are a relaxation time read for me *smile*

“There will be a lot of ‘what if’ situations, Cody. You can’t let that rule your life, not if we’re going to have a future. People get hurt, people get sick, and sometimes, people die before you’re ready to let them go.”

FYI... If you love western romances, sexy cowboys, hot steamy sex between cowboys, strong emotions dump into characters lives and bothers bonding together to form a family… This is a story for you.

Olivia Black writes contemporary and paranormal gay romance with Siren Publishing. She lives in San Diego, California and spends most of her time writing and drinking coffee. Olivia is a hopeful romantic and believes everyone deserves to find their happily ever after. You can contact Olivia Black at OliviaBlackBooks@gmail.com.