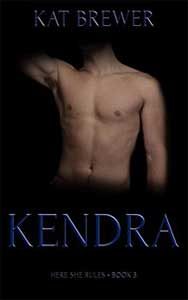 The Chronicles of Erla Series

Kendra Allen is a high school teacher swept from her life in Sacramento, California and transported to the world of Jiva. Dropped outside the King of Destia’s keep she finds herself locked in a dungeon where she succumbs to illness, and her life is saved by the handsome physician, Myles.

Cassandra and Willow bring Kendra to Erla where she finds a place as one of Nera’s warriors, as war looms for the Female dominant countries.

Tensions with a nearby male Monarchy of Varda escalates the threat of war. When Kara is taken captive, Kendra stages a daring rescue and earns her place amongst her fellow warriors.

My thoughts on Kendra

WARNING: This may have spoilers. You’ve been warned.

Before I start with this review I have to thank Kat Brewer for send me an ARC copy, again. I really love her stories so far and let me tell you a secret *she whispers to the reader* there are more in the making as I write this.

Kendra came thru the portal and end up in Darien’s dungeon. Can you say stupid guards? I can: Stupid Guards. They end up making her sick and she was in very bad condition when Myles finally got to her side and was able to help her. Of course, when Darien found out some stupid guards were punished.

She is one of those females that has an inner strength that you can feel somehow, even when she was not accepting where she was and what was happening to her. What I liked the most about her is that she is funny but also very honest, there is no way to hide when she is upset… and boy, Myles upset her *laughs* She is also very optimistic and kind to the people around her.

I enjoyed Kendra even a little more than Willow for some reason… you know what? I do know the reasons: a lot more drama, kidnapping, almost rape and hot guys *grin* and Kat Brewer even got away with putting the hot male specimens in the position of being the ones needing to be saved.

One of the questions this book answer for me was an existential question: How does the freaking toilet works on Jiva?! Honestly, I have been wondering about this since Here She Rules and even when I know it’s not a critical thing, it’s something I was kind of fixated while reading the other books. I do this from time to time, wondering about small details that are not particularly crucial to the story.

I believe that the more Kat Brewer writes, the better she gets *fan herself with her hand* Those damn hot sex scenes where to die for. After all that drama and stuff, a good sex scene to leave all the stress behind it’s the best idea someone could even have, and in Kendra it was greatly done. The versatility it’s really showing in her writing even more with time, and I’m not talking only of the sex scenes now, but the entire book.

Queen Nera speaking about other parts of Jiva made me realize the amount of possibilities for the next books in this series. It’s crazy the amount of stories Kat could create for us, the readers. The theories and conspiracies are running like crazy in this brain of mine *grins* I so want to see what happens next.

Lastly, the twists and turns this book had where amazing. I was NOT expecting some of the things that happened and my own theories were proven wrong. Also Willow and Darien’s relationship get to a level that I was waiting to see. Add to that the fact that the author gave a little preview of the next book… I’m hooked!

“No, he got me worked up then refused to close the deal unless I agreed to stay and ‘be his’, the bastard.” Kendra was incensed. “That’s a woman’s trick!”

“It is not just your beautiful body that arouses me. It is you and your spirit that drives me to distraction. I want to be one with you, to bathe in your light.”

“Darien.” Willow started crying noisily, and he turned to her.
“What is it, my beloved Willow?” There were tears in his green, green eyes.
“Why can’t you just be an asshole?” She cried harder.

Go pick up Here she Rules if you haven’t already!!
And Willow… and Kendra!!

I’m a Santa Cruz, CA native who now resides in rural South Alabama. In the grips of inspiration I can lose myself for days. I love to write stories with strong heroines that push past fear and insecurities and meet the challenges life throws at them. I believe every woman has a fierce spirit within and that when we unite there is nothing we cannot accomplish.

Willow is now available!
Willow: A tough as nails Marine Captain and a brilliant physicist come together to try to save their friend Cassandra, who was taken from our world through a Trans-dimensional Rift.

Upcoming books in the series are, in order:

Eve: Taken by the Rift, Eve sustains a head injury and is thought to be a pleasure slave.
Madelyn: Snatched from her life and a bad marriage, Madelyn finds herself embroiled in intrigue in a plot to overthrow the Monarchies