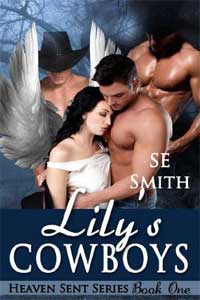 (Warning: This is a ménage romance between one determined angel and the three cowboys who love her).

My thoughts on Lily’s Cowboys

I must admit that this book was one of those romances that had my heart hurting, my eyes burning, my chest tight and the water works at the end was inevitable.

That being said this has a happy ending so don’t run away scared for the way I just described my body reaction during my reading of this book.

I love romance novel, have you notice that? *says knowing 95% of her reviews are of romances* So it’s not a surprise in that department. Something else I love are strong female characters and I have a soft spot for those characters that are deeply hurt or have scars (internal or external). We have those two things here *smiles like the Cheshire cat*

Allen has come home from the military, its brooding, feeling sorry for himself, blaming himself for something he couldn’t have prevented, being a pain in the ass to his brothers, not taking care of himself, drinking too much, etc. So there is our wounded soldier and characters with scars.

Ethan is the work driven brother. He makes sure things go like they’re suppose to go n the ranch. He works hard, it’s the one voicing the rules and putting people in line, doing the buying and selling, the books, everything. He is the older brother. Sadly he can’t put Allen in line, and that hurts him so he buries himself onto working on the ranch.

Caleb it’s the quiet one. The middle child sort of speaking. He bottle things up, swallow the problems until he can’t take it no more. He works hard at the ranch alongside Ethan, making sure they have what they need and helping the older brother in anything he can.

Maggie it’s the boys aunt and has come to see them because she is worried about Allen and how the boys are not close like they used to be. She want’s them to be the family they were before, so one day, when she is going to town, she looks up to the sky and pray.

Lilly has background story that it’s pretty dark. She became something special after she made a choice between life and death. Since then her task is to help people who need her until it’s time for her to move on, helping another people or family that needs her more. The sad side of things is how she has to go when her time with the person or family is up.

One thing I have to say, because I just loved it, was how Lilly managed to get Allen out of his room. That was just hilariously cleaver and fun to read. Another thing? The swear jar. Lilly could be rich just out of that money *laughs*

Now that I’ve talked a little about the characters, let me tell you that the plot of this story was somewhat new to me. The fact that Lilly was what she was, the fact that people where able to put two and two together about her and how things ended… Just was a great story for me.

The writing was great, nothing that confused me with the terms and stuff. Also the twists and turns during the story were well placed. There was no feeling like the book was going too slow or too fast.

What I’m trying to say is that I enjoy this books a lot. I was even expecting the next book in the series to be about the same topic but apparently it’s not. It has the same essence but not the same character? Arg… I give up *throw her hands up* Go look it up and you will find about it, probably will be seeing a review in a few week about that book too here *smile*

I’m definitively going to keep reading S.E. Smith’s stories. If not this year, because it’s almost ending, the next one will have enough days to read more stories. Right?

“Sometimes you have to face death before you can appreciate what it means to live.“ 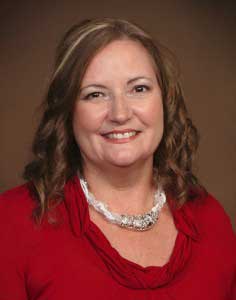 S. E. Smith enjoys the art of writing and being a storyteller who shares love and laughter through her works. She likes to travel and go camping in between working on computers and spending time with her family. Readers can check out her website at http://sesmithfl.com