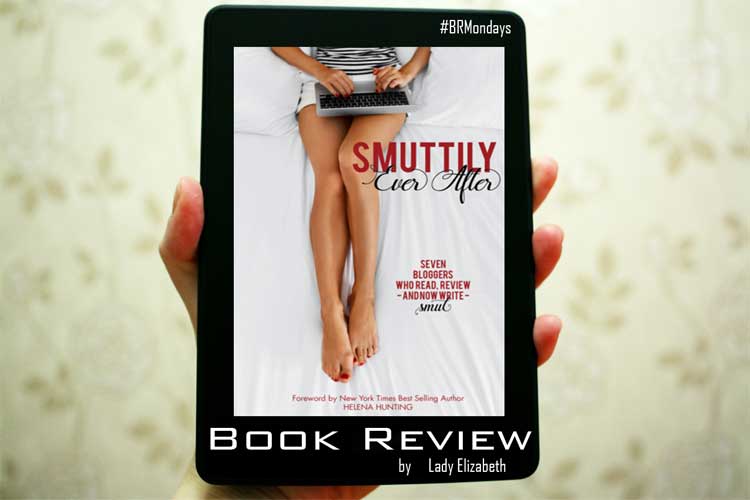 When smut happens, it’s always a happily ever after.

Seven bloggers have come together to create a hot anthology filled with the best variety of sexy stories.

All proceeds go to Paws With A Cause, a charity which trains and provides service dogs to people who can greatly benefit from assistance and companionship.

Calculated
The Messy Mind of Monique Pearson
A successful CEO finds her new PA has more to offer than his typing skills. In the office she’s used to being in control, but he has other plans in mind.

Rolling On A River
The Saucy Owl
One all-girl roller hockey team against the boys, in an all-day tournament of hockey and will power. It gets hotter than a girdle after a game when Frankie sees Taylor Rivers roll on by.

Love and War
Beauté De Livres – Beauty of Books
Having a future was never in our plans.
We were at war when we found each other.
But when the demons of your past crash into your present, will love be enough?

Falling Into You
Mila Grayson | KU Book Reviews
Think you can only find used furniture on Craigslist? You can also find second chances. Don’t let that chance encounter escape you.

Unexpected
Obsessed with Romance
When a single mother of twins joins her best friends for “a girls night out” she expects some drinks, laughs and dancing. But someone has other plans for her.

Wildest Dreams
Kay Su | BooksandMe
Three isn’t always a crowd. But trying to find two hot, dominating men happy to share the same girl isn’t ever going to be easy. Will dreams become reality? What are the odds?

Love For Us
Books And Boys Book Blog
Finding love on the internet is always a risky business. Full of catfish and unsolicited pics. But what happens when you find a connection faster and stronger than your wifi?

WARNING: This review have SPOILERS.
Read at your own risk.

Just in case the tittle of this anthology didn’t get to you like it should: This is Erotica. That means there is sex in this short stories. You have been warned. If you don’t like your books with steam coming out of them and you on a state of constant arousal… you are clearly reading in the wrong genre… *wink* If you do like this type of stories then you are in the perfect spot honey, and you better have your toys ready because this anthology right here will leave you… well… you’ll see for yourself *smile*

If the idea was start this anthology with a bang, for me was a shot to my ovaries. Hot Damn! This was right up my alley and left me panting and gripping the tablet like my life depended on me not dropping the damn thing.

Sonny… oh Sonny *fan herself with her hand* I don’t know what to say about him that it’s coherent. I was drooling since the moment he got into the picture in this story, until the moment the last word was shown on the screen.

Nora wanted something that she couldn’t get without rumors going high-wired in the office she was working in. She bust her ass off to get the position she was now in now, and sex was not going to get in her way. Meaning? It was a long time ago that she had a good heavy sex session with a man.

This was the perfect dance of hot and heavy sex with a touch of dominance and submission. I won’t go into detail but this story will be a must-re-read for those lonely nights. You know what I mean…

Frankie surprise me with her boldness and her way of acting around Taylor. I was curious to see what would happen between them and it was exactly what I was expecting to see.

The sex scene between them was explosive, and sexy obviously. I enjoyed every moment in the shower and outside of it *wink*

That ending was so cute *smile happily*

At the beginning I was a little confused because I really didn’t know what was going on. Then I thought that the female was insane or just plain stupid to let another man touch her like she was doing and finally, I had a moment of clarity and I thought:

“This author was brilliant! She misled me to believe the protagonist was going to throw her life away, cheat on her boyfriend of years and for what? Because of fear? Because she couldn’t stand her grounds and say no? Because she was so freaking attracted to this other man that she was melting at his feet?”

The reason behind the role play and the situation they were in, that brought them to that club that night, made me feel good for them, they were going forward and sticking together, no matter what crazy things they needed to do to confront their demons.

The author did an amazing, excellent job with this story. And that finally scene… S-E-X-Y!

This was another surprise for me because I was not expecting the author to come with such a cleaver way, at least I think it was cleaver, to make a whole story including Craigslist and that something good came out of if all. I have heard the horror stories about that site, even in South America we get that information.

It was a sweet romance as a background for steamy situations that became very hot, very fast.

Bree was called the Ice Queen in college, she didn’t date much and she was ok with it but one encounter with Liam and his puppy Brutus, and she was done without even knowing it.

The back and forward messages where good and was a great way to make the reader know about the past of each character. It wasn’t info dump and I liked that a lot. It felt natural, like it was going to be like that anyway.

Liam way to know she was the one at the first time and going to that far as to post an ad on Craigslist to look for her was romantic, bordering on dumb because… Craigslist. But he took a chance and it pay him back.

The interaction between Bree and Liam were so sweet, funny and sexy, all wrap into one big package and I’m not talking about Liam’s junk… not completely *laughs*

I just have to mention that the ending was so sweet, romantic and it melt me on the floor *swoon* They did things differently, why start now? I Love It!

Cecilia got the surprise of her life when her two best friends organize a trip for the weekend away from her twin daughters. Nothing was better than to have a whole day in a Spa to be pampered and she felt prettier afterwards than ever. She’d needed this for a long time. What better way to end the night that going to the hottest Club in town and hook up, not intentionally, with the most gorgeous man in the place.

Asher was a total gentleman with Cee, or at least he tried because the woman was a little minx. She got him completely under her spell in seconds. Her confidence was sexy and alluring, which was something I like about female characters. She knows she is hot and she works that to her advantage completely.

A voyeur scene with hot water and even hotter orgasms.

The steamy, literally, scene in the jacuzzi was pretty much panty dropping but add Paul to the mix and it was explosive. I have read voyeur scenes before but this was so well done that I almost forgot Paul was even in the room, except when he was mentioned because the levels of hotness were too high.

The personal history of Cee and Asher got to me. I really wanted to kick his other woman’s ass until the day after tomorrow, really? Who does that? How cold do you have to be? And Cecilia, poor woman, the good thing was that she came out the other side stronger and I’m sure her husband would have been proud of her.

The ending *sigh smiling* She took control from the beginning, and she had to take control over THAT too. It was expected of Cecilia to do something like that and I would have payed to see Asher’s face.

The way Atria felt about her need for submission had real touch to me, but what really drove the points up for this book was the way she felt and express about needing two men on top of the submission.

The interaction between characters was smooth and had a flow that I really enjoy. Nothing stood out as weird for me. Even the anxiety attack she had I understood. But I was left with a few questions about Nick and Javier’s relationship.

The scene at the party was intense and also panty dropping hot. I would trade places with Atria to have someone wanting me and giving me their all undivided attention with the intensity that Nick and Javier had.

It did felt a little bit… *bite softly the inside of her cheek thinking* There was something missing in comparison with the 3 stories prior to this one. I can’t point you to what was missing, but for me it didn’t feel as satisfying. (It really irritates me when this happens and I can’t explain why I feel the way I feel)

For some reason, the two points that I mentioned above makes me think that this book will have something more but I still felt like something was missing at the end. I can’t wrap my head around what could it be.

Brynn and Simon felt pretty realistic to me while reading the story. The fact that they meet online (on FriendBook) made me want to know how things where going to develop between them. Later knowing they lived in different countries was even more intriguing. How were they going to navigate the long distance relationship?

Needless to say, the author did a very good job at portraying the way they were learning about each other and the effort they put into keeping in touch every day, using every means necessary.

That Simon turned out to be a Dom was a surprise that I liked and didn’t see coming. But that only added to the hard and fast sex scene over the couch, wich I may say left me wanting to be in Brynn shoes for just a moment… Just until the amazing orgasm and then I would leave them again to be themselves with each other *laughs out loud*

(Sorry for any grammar mistakes that you may find.
I try to avoid them but they sneak in anyway.)