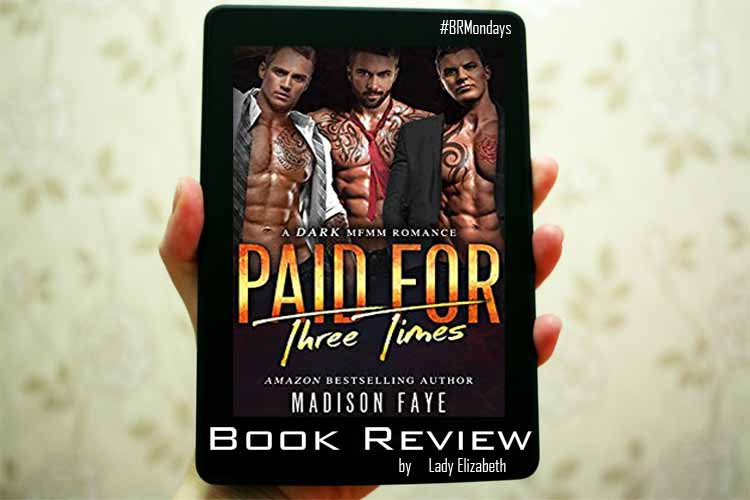 The night I was taken changed everything, and shattered who I thought I was.

Stolen away, they put me up on that stage, ready to be sold to whoever could pay.

And there are three who could. Three rich, powerful, dominant, gorgeous men – men with the means to pay for their darkest desires. Three possessive, dangerous men who want me on my knees, ready to submit.

They’ve locked me away in their mansion – at their mercy and at their bidding. They stir something dark in me – desires I’ve never admitted even to myself. And I know its’s wrong to think this way about the men who’ve bound me and made me their possession, but it can’t be controlled.

Maybe there’s something wrong with me – something broken. Maybe it’s always been like that, and maybe only they can fix it.

Submitting, and giving up total control to the three tempting, filthy, dominant men who paid for my obedience might be the key to my salvation.

But only if I dare.

Paid For Three Times is a dark, steamy read involving a mfmm menage romance with three completely obsessed alpha heroes. This is all about her – no m/m. If you love over-the-top, slightly unrealistic, and wildly dirty romance with plenty of steam, this one’s for you! HEA with NO CHEATING!

WARNING: Read at your own risk. This have SPOILERS.

I enjoy menage stories and Madison Faye with Paid for Three Times did not disappoint. From the characters to the plot line, there was something calling me to keep on reading until there was nothing else to read, the book was over. Also, the level of hotness of the three Doms was just at the level I love the most.

Mia fought with herself almost the entire book because her feelings to her made no sense at all. She was kidnapped, bought and kept prisoner by three hotter than hot male Doms and even when her brain told her she should resist, her body did not agree. I love that struggle within characters.

Menage MFMM stories are not easy to write (says someone who had tried and end up erasing the damn thing) and the authors can have problems putting the characters together in a way that doesn’t feel forced. In this case, Madison Faye did a great job with Oliver, Eric and Ash interactions with Mia. I have to say I’m very interested in see another book of her with this type of menage in the future.

Ryan is a piece of shit, good for nothing, son of his fucking father, motherfucker *take a deep breath* Ok, better stop cursing… Now, I don’t like the guy at all. He is a coward of the worst kind and he wrongly believe that he has the right to do whatever he wants to women, just because he bought them at the action. They are human beings you moron!

I really got a problem with Andrea at the end. I don’t care how much of a friend she was to Mia, and I get she was put in a difficult situation, but you just don’t do that to a friend. Realistically, I get it, in that situation I can understand but that doesn’t mean I’d forgive easily or fast. On the other hand, I know how to hold a grudge so… *shrug*

I agree with the author when she stated at the end of the synopsis that the story it’s unrealistic at some points, but I also believe that is normal, considering we are reading a romance novel, not a biography. Besides, you don’t even notice the little details until later in the book when you are completely engulfed by the story and you have to finish reading.

One thing that bothered me, but I have to admit it’s something I tend to see so much that it’s kind of becoming a pet-peeve of mine… or at least it stand to me like a sore thumb when I read: the comparison of the male body’s with Greek gods. I get why that it’s there but there has to be some other way to describe them too, right?

The story flowed very well from beginning to end, without any strange vocabulary that could make the reader confuse or halt in their tracks to do a quick Google search to find out what it means. Sex scenes where everywhere, and I appreciated the fact they were greatly done, with no excess description and to be more honest, most of them where worthy of a little “private” time *laugh*

I’m voluntarily doing this review and I’ve read an advance readers copy to do so.

Madison Faye is the dirty alter ego of the very wholesome, very normal suburban housewife behind the stories. While she might be a wife, mom, and PTA organizer on the outside, there’s nothing but hot, steamy, and raunchy fantasies brewing right beneath the surface!

Tired of keeping them hidden inside or only having them come out in the bedroom, they’re all here in the form of some wickedly hot stories. Single-minded alpha hero, sinfully taboo relationships, and wildly over-the-top scenarios. If you love it extra dirty, extra hot, and extra naughty, this is the place for you! (Just don’t tell the other PTA members you saw her here…)