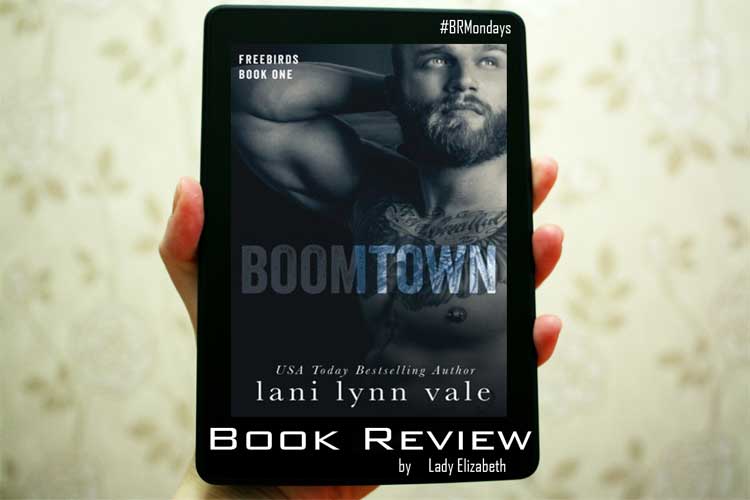 I wanted to have a pity party of one when I went for that beer. I never imagined I would meet a dark and dangerous man. That man took me on the wildest ride of my life. Literally and Figuratively. He quickly became my entire world.

I didn’t know I was looking for her. I saw her warming that bar stool and knew she would be mine. A man like me doesn’t deserve the likes of her. But damned if I didn’t take it.

When we met for the first time we didn’t know that we already had a connection. A cruel game was being played, and we didn’t know the rules. Sam would save us, but at what cost? Sam was one of my main reasons for living. If he wasn’t in this world anymore, would I still want to be a part of it?

First and foremost *looks at the new cover* check him out! Sam looks hotter in that picture than in the original cover from 2015.

Boomtown is the first book in the Freebirds Series by the amazing Lani Lynn Vale. I got this book after reading another one of hers and realizing that I was reading in the wrong other.

We have a twenty-something Cheyenne with no experience what so ever in bed and she decides to go to a bar, on her birthday, and have sex with a hot guy that she meets there. That turns out to be just the starting point for a life change, just because she meets Sam and have sex with him.

Sam is part of the Army, a Commander to Cheyenne’s brother James, to be exact. When they figure this out its plain fun because James told his army brothers about her when they were on tour.

The relationship between the protagonists grows with time, aid by the series of events that happened, making Cheyenne a target of someone really bad.

We get to meet characters that are relatable, charismatic, fun, hilarious even. The suspense was on the right level for me with this story. Sometimes I could believe things got crazy, but since I love this kind of book when the author doesn’t hold back… I loved it!

I can’t say anything bad except for the fact that I think Malcolm was the worst piece of sh*t you could have ever encounter on a book. To do that to Leah! I felt horrible and at the same time, I couldn’t put the book down.

The reason why I took half-star from my rating is that even though I adore the couple, it’s not my favorite of the bunch. I still think it was an incredible story, don’t get me wrong, but I can’t say I felt it being perfection.

I’ve re-read this book 3 times so far and I don’t rule out another passing because I just plain love it. Not only the characters, the intricate web of relationships, the vocabulary that can come from Cheyenne’s mouth, but the fact that all the books are interconnected either with events or people. It’s a giant web of information, a puzzle that I want to solve and connect the dots.

I’ve made it my mission to connect the dots between her series so I will be doing just that, in time of course. I don’t know if I could do a good job if I binge read all of her work, one book after another. Right?

Lani Lynn Vale did a great job with this book, and it was her first! Can you imagine what’s next? I can’t wait for the next book to come out.

Lani Lynn Vale is a USA Today bestselling author of Contemporary and Romantic Suspense and has a love for all things romance. Lani is married to the love of her life that she met in high school. She fell in love with him because he was wearing baseball pants. Ten years later they have three perfectly crazy children and a cat named Demon who likes to wake her up at ungodly times in the night. They live in the greatest state in the world, Texas. You can find Lani in front of her computer writing away in her fictional characters world…that is until her husband and kids demand sustenance in the form of food and drink.