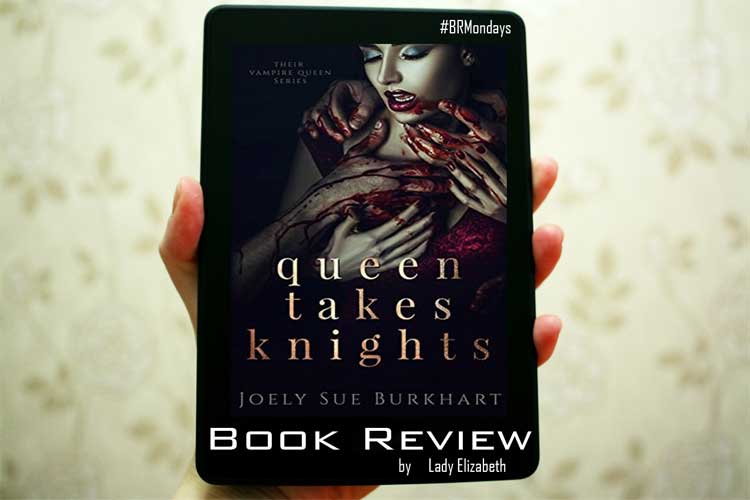 WARNING: BLOOD is an intrinsic part of this story and it’s characters. If you are NOT SURE you’re comfortable with blood + sex I would recommend you step with caution into this book. If you just CAN’T stand the idea, DON’T read this book.

With that out-of-the-way, I can actually go into this review and honestly, deciding what to write here was not easy. I have mixed feelings about this piece of art like you wouldn’t believe and I don’t know if my words will make justice to what I want to express but I will try.

It’s not my first time reading a Joely Sue Burkhart books and yes, I’ve read her series. Her writing amaze me, her character development, the way she can portray things without letting her pre-conceive ideas get in the way of the words on the page. I was shocked by this book. In a hell of a good way, but either way, shocked.

Like I said in the warning above, blood is everything in this reverse harem paranormal romance. A Queen Vampire and her Knights, you would think normally blood would be involved, but this is next level stuff. ANY blood from the Queen is fair game *look you in the eyes* ANY blood from the Queen. If you get what I mean you will understand my sense of shock and gross and behind all that, pride as a woman.

Shara Isador is the last Vampire Queen of House Isador, the problem is, she doesn’t know this. Her parents were killed when she was seventeen years of age and since then, she has been on the run from what she considers vampires. Trust me, her description is just what old vampires would be described as in novels.

Alrik and Daire are two paranormal creatures that come to Shara’s rescue when she needs them the most. They explain to her a few things along the way and when she is back at her old parents house, she learns a lot, and I mean A LOT, about herself and her legacy.

I won’t go into details because Spoilers but there is plot twist after plot twist since the book starts to the very end. Some times my head was spinning so fast that I didn’t know what way was up and I questioned Shara’s mental health, as she did herself, in other occasions.

Given the chance to have a discussion with anyone about this book I would gush about it like nobody’s business. I will mention that blood + sex and the ANY blood from the Queen is fair game thing did put me off a little bit. Wanna know my secret to read this book 3 times in a week and love it: In those gross parts, imagine the blood is whipped cream that the put on her or melted chocolate *shrug* It worked for me.

The reason why I didn’t give this book a 5 Star review is exactly that reason in particular. The fact that I did say “gross” out loud and was put out a little bit, until I found my ground again, makes it a 4.5 Star read in my scale.

I have to give Joely Sue a round of applause because she made me love this book even though I didn’t pick it up before, because I thought I wasn’t going to get pass the blood. I even finished it and got book two at the ready, so I jumped right in and I’m done with it also. Now I want Bloody Book Three!

Disclaimer: I was given a copy of this book for reviewing purposes (*-*)
Thank you, Joely Sue Burkhart!