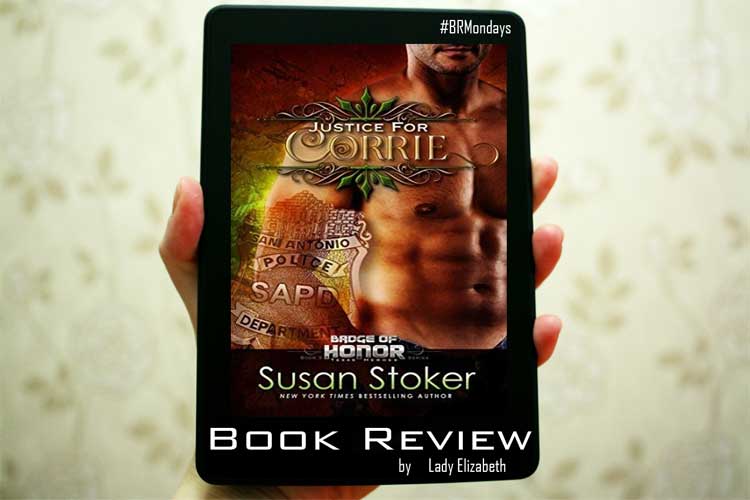 My first book review of 2017 was an amazing book by Patrick Khayler and following that I wanted to start 2018 #BRMondays the right way, that means featuring another breathtaking book with incredible characters and awesome story to boot. That’s why I’m bringing you Justice for Corrie by Susan Stoker.

I had the surprise of my life when browsing to my Kindle books I found this little jewel and I didn’t even know it was going end up being that good. I just picked it up because the heroine is blind. Yes, that was my reason to pick this as my next read and what a journey.

Corrie Madison is my hero. I respect the woman like no other. Being blind since birth and being able to live as independently as she did, it’s plain inspirational. Add to that her self-sufficient streak, no non-sense attitude and her humor and you have yourself a character to remember.

Officer Quint Axton meets Corrie kind of by accident but he’s completely taken by her from the moment he laid eyes on her. I don’t blame him at all, she is fascinating. He is also a wonderful character. Such respect for Corrie, doesn’t make her feel like she’s handicapped. He gave a speech about her ex that left me in love with him.

This is a suspense story but the romance is the main plot. The writing was beautiful and I couldn’t put the book down until I finish it. And yes, it was at the wee hours of the next morning.

If you read this, please make me the favor: don’t skip anything. Not that I think you could, it’s practically impossible because the story compels you and doesn’t allow you to look away until the end. And what an ending! It has HEA and No Cliff-Hanger.

I would definitively recommend Justice for Corrie by Susan Stoker. It was one of the most inspirational romance story I’ve read in a while. I’m a fan now and I will be devouring Susan’s books left and right.

New York Times, USA Today, #1 Amazon Bestseller, and Wall Street Journal Bestselling Author, Susan Stoker has a heart as big as the state of Texas where she lives, but this all American girl has also spent the last fourteen years living in Missouri, California, Colorado, and Indiana. She’s married to a retired Army man who now gets to follow her around the country.

She debuted her first series in 2014 and quickly followed that up with the SEAL of Protection Series, which solidified her love of writing and creating stories readers can get lost in.