“Two for the price of one” *laugh a little* Hi everyone. Two reviews in one day? What’s up with that? I just have to put this out there too and the fact that I couldn’t upload last week due to internet breaking down *growls softly because of it*

This is a book that I just couldn’t help myself and bought as soon as I found the author on Instagram. The premise was very good and I needed something military so I went for it after little thought about the price… of course… I don’t always do that.

What finally drove me to it was that Jay Hope posted a picture of the tittle for the 5th installment of this series and I just have to read that when it’s done because I just LOVE bad guys points of view.

As soon as I said that I wanted to read it I just knew I have to get my hands on the complete series, of course. So far just one book but my fingers are itching, so I stay the hell away from Amazon… for now… 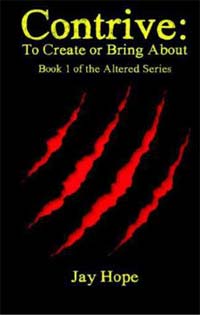 Contrive: To Create or Bring About

Another titles in the series: Adapt: To Modify for a Different Purpose, Diversify: To Make or Become more Varied; Encompass: To Enclose, Envelop.

Faith Meyers packs her car and heads to her sister’s house in San Diego looking to put some distance between her and her possessive ex in hopes that he’ll move on and forget about her. Faith looks forward to meeting her brother-in-laws SEAL team, but not in her wildest dreams could she have known the friendship, and possibly even love, that she’d find in them. When she and the sexy team leader are hit it off, she’s warned to stay away from him and knows that he has a dark secret. As her ex becomes more and more psychotic, the sexy SEAL’s protection is exactly what she needs, but will he turn out to be just as psycho?

Wil Walker is a SEAL and chosen to be a part of the GES Project (Genetically Engineered SEAL). He’s regretted that decision every second of every day since. Wil has finally begun regaining a little control when a SEAL team member’s sister-in-law shows up, wreaking havoc on his system. He knows he should stay away from her, for her own safety as well as his, but he’s drawn to her in a way that he’s never experienced before. To make matters worse, she needs his protection. Will he keep her safe from one man only to put her in more danger from another? END_OF_DOCUMENT_TOKEN_TO_BE_REPLACED