Hello to all of you out there on the other side of the screen *smiles* I hope you are doing good and not trying to kill me for my disappearing act… Which started with me being sick, then with me reading like a crazy person, my trying to write but too many plot bunnies showing distracted me and so on…

But we are not here to talk about all that, we are here because I want to give you my honest opinion/review on a movie I saw a few month ago *smiles again* So here we go…

This movie I saw it by myself and I did enjoy watching it. The truth it’s that I had a blast at the theater even thou I was worried because I tend to laugh at parts when the characters do things I think as funny and not always people around me agree on those moments.

In the theater were 3 couples, I thought married couples because of how they were dressed and the age that they look. Also there were 5 school girls with their school uniforms and I remember that they had to show their ID to get the tickets.

In order to make this more easy for you to read and understand I will be answering questions about the different points I wanted to talk to you about this movie.

I did like, I enjoy it very much. It wasn’t so dark as the book was and being able to finally put a face to Christian that wasn’t Robert Pattinson was even better for me. I hated it when people find out that the base behind the book it was a Twilight fan fiction. I had read the book before that knowledge was out so it wasn’t so much of a problem.

Did the rate bother me?

Only +16 bothers the hell out of me. Why? Because I was 16 once and I know that at that age I didn’t listen to reason or didn’t ask for anyone to talk to me about things I didn’t understand. I form an idea in my head and that was the way it was, no matter what other people said.

Teenagers are very impressionable creatures (if you are a teen reading this, do yourself a favor and think about it, you will see it’s true and it’s not a bad thing). The problem for me is that teens get the image on the screen and fantasize about it, want a relationship with a man “like that”, want a “master” and most of them (not all) tend to just jump to conclusion or do things without considering the risk or that other people may take advantage of their lack of knowledge or eagerness and they could get hurt, badly.

Did I like the cast for Christian and Anna?

Yes, but… let me separate this in two so I can speak about both of them.

Dakota it’s a good actress, she did a great job portraying Anastasia but (for my taste) she is just too skinny. If I was Christian I would be scare of breaking her or that her bones poke me during some intimate moments… and I’m not even joking here. She need to get a little bit more meat in her, at least until her ribs don’t look like they may get out from under her skin when she bends.

Jamie… Oh Jamie… What can I say about him? A picture maybe? 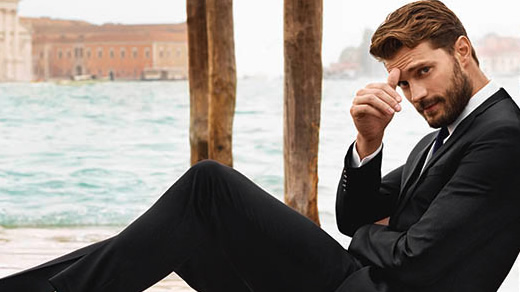 I still don’t know how to explain myself when it comes to him. If only Christian Grey let himself grow a bear… maybe? someday?

Some people didn’t like it when he took the part, and I wasn’t all too happy but after watching a Youtube video from the Author E. Jamie (from around the time when the trailer came out last year) I had to agree with her and look at Jamie with a different set of eyes.

If Ian Somerhalder, Chris Hemsworth, Alexander Skarsgard or other well-known actor took the part of Christian Grey we will not be seeing Christian Grey, instead we will be seeing Damon Salvatore, Thor, Eric Northman, etc; playing kinky with some girl named Anastasia. And most of you out there know that I’m right (well… actually E. Jamie was right when she pointed this out).

The movie did justice to the book?

I have to say, in all honesty that I love the movie more than I liked the books. There *raises her hands up in surrender* I’ve said it.

I won’t lie… Knowing that was a fan fiction spoiled a lot of things for me, not all of it but a lot. Also the fact that people gave too much credit to that fact annoyed me a little until I just didn’t care anymore. Also explained the way it was written, since I write and read fan fictions myself, so I know…

Comparing 50 Shades of Grey with Twilight

Ok, this was something that I had to do and I hope you get this because if you do not understand what I’m about to say I don’t know how to explain it better:

50 Shades of Grey IT’S NOT Twilight!

That being said, it’s not fair compare this two movies or series at all. They are two different stories from two different people. Yes, 50 Shades it’s Twilight fan fiction based but it’s not the same thing.

Every author has to have an idea from something or someone: Somebody said something, did something, saw something that spark an idea on the writer’s mind.

Didn’t annoy you that Christian told Anna what to do all the time?

No, it did not. I tell you why… She is portrait as a girl that it’s very naive and innocent. She forgets stuff around him, and if you have read the books you know that if he doesn’t remind her of eating she doesn’t. She just simply don’t register the need to eat until she is starving or something.

Another reason why it didn’t bother me was because, if you look at it from a Master/Submissive relationship or even a normal relationship, the boyfriend it’s concerned with her well-being, her protection, her health, etc. So it’s not such a bad thing as people think it is that he notice things and kind of nudge her to eat or stuff since it’s for her own good.

Anastasia development in the movie

I’m very happy to say that I saw her development during the movie more than in the book. It was very easy to notice how she was transforming from a sweet innocent girl to a very well, put together, don’t take you crap, kind of woman.

An example of her innocent girl at the beginning was that scene when Kate, her roommate, took her sandwich away after telling her she didn’t want one and Anna didn’t say anything to her o even make another one to eat herself (prove that she need the reminder to eat!).

An example of how she grow up was the scene when Anna and Christian discuss the contract. How she took his hand from the small of her back and said “Business meeting” to him and how she, even hot and bother as she was, got up and leave the conference room after it was all done and didn’t have sex with him

Ok this is a long one so get ready…

This scene was plain stupid coming from both ends. Anna and Christian were mistaken in this scene and even thou I understand a few things and what came out of it… I don’t agree with it.

Anna wanted to know how bad it could be, it was her own words in the movie. Christian asked her more than twice to know if she was really, really sure that she wanted him to hit her like that with the belt (he gave her a choise) and she said yes (notice that she choose this).

People get so upset about this scene and I have to tell you I was upset with both characters, why? Anna for being ridiculous at the end, getting angry because she got exactly what she asked for. I get it that she wasn’t expecting Christian to hit her, but really? He gave her a choise, more than once, and she choose and he did just as he said he would. He didn’t lie to her, he did what he said he was going to do. And she could have stopped him at any given time, she wasn’t gagged, she wasn’t tied down. She wanted to take it all to prove to herself that she could, to not back on her own words and to know Christian in a deeper level. She got what she asked for.

Christian was plain dumb when he agree to that stuff. A good Master knows that when someone asked you something out of anger you just simply do not do what they asked for because their judgement it’s not clear. As a Master you should be able to read your submissive or lover and not hurt the other person. He made a mistake and he paid greatly for it. But I have to say, he didn’t lie to her, he told her what she was going to receive from him at that time, six hits with the belt and he didn’t hold back, if he did, he would have lied to her.

I do not condone what he did or what she did choosing to take the hits. But I do understand it.

My BIG thing about the movie

Please do me a favor and thing about this for a couple of minutes and take a look at how important, how shocking this is…

Did you get it? A fan fiction… something that some people think writers wast time writing… has hit the big screen…

What will this mean for another’s fan fiction writers? For me it gave me hope… Hope that some day one of my writing could make it out there, maybe not in the big screen, but who knows… Maybe I could start a story as a fan fiction, then the story could evolved out of it and make it hugely in the Best Seller lists…

Have you watched this movie? What did you thought of it? Do you agree or disagree with the things I have written here?

Tell me in the comments below 🙂