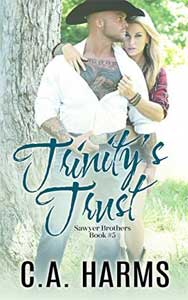 Trinity Flores stumbled upon the Sawyer family when she needed it most.

She was broken, lost, and looking for a new beginning.

They gave her love that most dream of, unconditionally devoted to her well-being.

When Chase Douglas came to town, he hadn’t expected to do anything other than help his ill grandmother. Then the new deputy caught sight of the shy, blonde-haired beauty and it was impossible not to want to know her more. But he had no idea the torment he was about to face, or the obstacles he would encounter from the Sawyer Brothers.

They didn’t make it easy for him to win her heart. He had to prove himself first, and that just made him fight harder to prove he was the right man for her.

Gaining Trinity’s trust was his number one goal.

Because in Chase’s eyes, no one deserved the love of a devoted man more than the woman who captured his heart. END_OF_DOCUMENT_TOKEN_TO_BE_REPLACED

One of the hardest things I have ever had to do was bury my wife.

The second hardest thing would be watching my twelve-year-old daughter fall to her knees as they lowered her mother into the ground to rest.

A heart-wrenching vision that will forever be etched in my mind.

Claire was my best friend—she had been since we were barely old enough to talk. I always knew, one day, I would marry her. I think I may have even told her that a few times while we were growing up.

Never did I think I would lose her so suddenly.

I knew at that moment…

Our life would never be the same again…