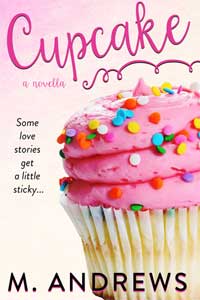 From the time I was able to hold a ball, I have lived and breathed football. It controlled every aspect of my life. The game consumed me, that was until I met a sweet feisty blonde, pastry chef named Pippa Montgomery. The moment I laid eyes on her she turned my world upside down. Now all I want is to live and breathe her.

Grayson Bennett looks like the all American boy next door, but beneath his sweet charming personality beats the heart of a dirty talking sex god, who with a single touch of his hand turned my boring existence into a wild ride of hot sticky sex. Grayson also gave me the confidence to go after what I really wanted… Him.

They say some love stories are complicated, but our story gets a little sticky.

My thoughts on Cupcake

I’ve been meaning to read this book since it came out. I even got it when it first came out but did not read it right away. Now I finally managed to do it, not that it was any hardship at all really, and it was a fun hot read.

Grayson was a good character too but for me, it was Pippa that made the book because she attracted me and kept me curious, turning pages to know what else it was going to happen with her. He was an ass at some points that I won’t mention but I’m glad she did the things she did and he redeemed himself to me when he took care of her. Now THAT was a moment that made me go all “awwww” over him.

I do have to point out, in the name of honesty here, that I did not like the physical description of Pippa because it got engrained in my brain so badly that I could just not look pass it. She was not bad looking or anything but something in the way she was described just didn’t sit well with me.

*Sigh* I know what was wrong in that description, now that I think about it more thoroughly, it made me think of a brainless bimbo and I’m sorry if I’m offending someone but I’m being honest here. I don’t know how to explain it to you but in the end, everyone is different and sees things differently. This is how I saw it for a moment, until I got pass it.

Pippa was smart, fun, caring, secure of whom and what she was, and THAT didn’t sit with what I felt about her when I read her physical description. After I got pass that, the book was pretty awesome. In fact, I will say in all honesty I would read it again.

Something that I like about M. Andrews books, because I have read The Big Gamble last year and I have other two out there so far: Taking Chances and Sweet Seduction. Is that she has a way with words and her female characters are these strong women that have flaws but they know what they want. I also like the fact that her male characters are so good at “eating” them up. *Wink*

Pippa Montgomery, the beautiful star of Pippa’s Just Desserts, blew into my life like a deadly tornado. Instead of killing me she did the worst possible thing, she had me addicted and then left me without so much as a goodbye.

She could make me hard reading the menu at Starbucks.

I feel oddly like the prince from Cinderella, but instead of searching for the foot that fits the shoe, I’m looking for the dick that fits my pussy.

“Why would I bring you flowers, when I can give you what every woman really wants?” She stands up on her tiptoes, her lips barely brushing against mine as she whispers, “What’s that?” “Multiple orgasms,” 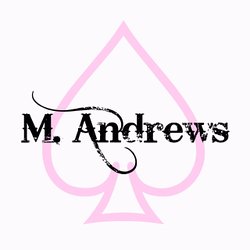