A SEAL’s Vow by Cora Seton

The SEALs of Chance Creek Series

Navy SEAL Clay Pickett needs a wife, fast, or he’ll lose the model sustainable community he and his friends came home to Chance Creek to build. He’s got just the woman for the job in mind: sexy, sensitive Nora Ridgeway. Too bad she’s not interested in rushing to the altar.

When Nora leaves her job as a school teacher to open a Jane Austen Bed and Breakfast with her friends—and finally get a chance to write her novel—she’s relieved to escape the escalating threats of violence from an unknown student stalker, and more than a little interested in the Navy SEAL who’s after her heart. But when trouble starts stalking her at Chance Creek, Nora begins to wonder if she’s left her past behind after all.

Can Clay and Nora find a way to be together when everything is trying to tear them apart?

END_OF_DOCUMENT_TOKEN_TO_BE_REPLACED 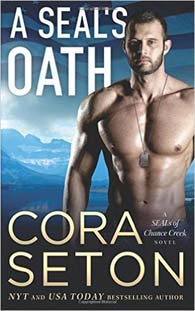 A SEAL’s Oath by Cora Seton

Navy SEAL Boone Rudman and his friends are ready to make their mark by creating a sustainable community that can be replicated anywhere in the world. But they need land, so when Martin Fulsom, iconic leader of the Fulsom Foundation, offers them Westfield, an uninhabited ranch in Chance Creek, Montana, they take it sight unseen—and agree to Fulsom’s condition that they document their progress on a reality television show. Building a working community will be hard enough, but Boone’s got another problem. Fulsom expects families—not single men—to make up the population of the new town. Now Boone’s got to find a wife, fast, before he loses his funding, and his dream. So when he arrives at Westfield to find it already occupied by Riley Eaton, the woman he thought he’d lost forever, he wonders if fate itself has provided him with an answer.

Riley Eaton’s played by the rules all her life, but it hasn’t gotten her anywhere. Now she’s out of work and no closer to being a full-time artist–or meeting a man and starting a family. Never happier than when she’s buried in a Jane Austen novel, she knows she’s not the only woman longing for a simpler, more beautiful life—one that allows time for art, literature and music. When she discovers her friends are in the same frame of mind, she throws caution to the wind and invites them to Westfield, the ranch her uncle inherited long ago, but has never lived in. Equipped with a key and a standing invitation to stay there whenever she likes, she heads to Chance Creek and gives up all things twenty-first century in order to take a six-month Jane-Austen style vacation. Westfield is perfect for Regency living with its wide lawns, extensive gardens and large ballroom. But when sexy, stubborn Boone shows up with plans to build a hyper-modern sustainable community on the ranch, it’s clear her Regency paradise is over before it even began.

Now Boone has thirty days to marry Riley or lose the ranch to developers, and Riley has to decide whether to marry Boone or say good-bye to Westfield–and her Jane Austen life–forever.

Can they overcome their prejudices to help each other? Or will their pride destroy both their futures? END_OF_DOCUMENT_TOKEN_TO_BE_REPLACED