This is one of those readings that I have been putting it off and putting it off again and again… Why? Because I knew I have to read this slow and it was going to make the damn water dam break… And it did!

The way I got this book was by buying it on Kindle way back in February 2015… Why? Because the lovely Alysha Kaye left a comment on one of my first Book Review post, that’s why.

As soon as I read the blurb of the book I was hooked but I also knew that I wanted to make a review for this reading and I was worried that I would read so fast (eat it up) that the review wouldn’t be good enough. So I waited… and waited… and waited… and finally said “Enough it’s enough, damn it! I have to read it, I want to read it since I bought it so… I will read it before the month it’s up” And so, here we are… 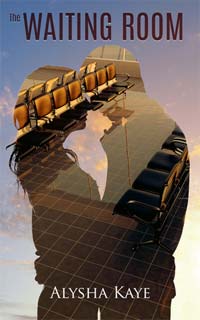 Jude and Nina are the epitome of that whole raw, unflinching love thing that most people are jealous of. That is, until Jude dies and wakes up in The Waiting Room, surrounded by other souls who are all waiting to pass over into their next life. But unlike those souls, Jude’s name is never called by the mysterious “receptionist”. He waits, watching Nina out of giant windows. He’s waiting for her. What is this place? How long will he wait? And what will happen when and if Nina does join him? The Waiting Room is a story of not just love, but of faith, predestination, and philosophy, friendship and self-actualization, of waiting.

My thoughts on The Waiting Room

It took me more than a week to finish this book because I keep putting it down. Don’t get me wrong, I wasn’t because it was a bad read. In fact… it was completely the opposite of bad. It was so good and so deep sometimes that I just have to give my brain room to process the things I was reading.

Jude it’s a great male character and we start the story with him and his wife Nina, which it’s a terrific female character and very important part of the book. But back to Jude… Let me tell you that man ask a lot of question, like, a LOT and it’s very curious but at the same time it has a little problem trying to add new ideas into his mindset sometimes hahahaha

Nina, on the other hand, it’s more accepting of change in believes and she create this movement inside The Waiting Room. Well, not a movement, but a big change and it’s very inspiring and important at the same time. I like her, she doesn’t ask too many questions but her opinions or reflexions are very much something that I enjoy reading in this book.

Then, there was Ruth and OMG don’t get me started on her because, really? That was a hard-headed woman like no other. She resisted until the very end and fought Jude and Nine every step of the way when they wanted to make a change or, in Jude’s case, wanted to know so much that he became a little bugger to her. In the end of it all… I love Ruth because she became the grounding individual when they wanted to take things too far.

The writing was very fluent, there was no problems in my opinion about the way Alysha present the story and it was not packed with words that I needed to go and look over because I could understand them. There was a lot of dialog and again, in my opinion, was good dialog, specially the way things developed with it. But the description was a really good one because besides dialog, a good book has to have good descriptions.

The meat and potatoes of the story, the plot, was really not new but it was a very cleaver way (in my opinion) of presenting the subject to the readers. I want to believe in an afterlife, but like Jude, I’m a little resilient to not thinking that it’s something… complicated, just to say the least, to explain. At the same time I whole-heartedly believe in different lives and reincarnation, and the fact that Alysha mentioned the non-chronological thing around it, was just sooooooo good.

A word of warning… this book will make you cry. I hate goodbyes and there are a lot of them in this book, so sweet and romantic that I just couldn’t prevent myself from tearing up and sometimes even put the book down, for a few moments, because of them.

Lastly, it wouldn’t be an honest review if I didn’t mention the things I didn’t like about this book and there was just one thing that bother me a lot at the beginning. I learn to deal with it by the 30% of in it but… The heavy GOD ideas. You could say heavy Christian ideas. Why it bother me so much? Because books with heavy Christian ideas are not my cup of coffee.

By the time I got around a little over the middle of the book the author, Alysha, banished all my uncomfortable feelings because she mixed other religions and ideologies that mingle so well and they made so much sence together. She put me on a good track and I could say with honesty that, that little detail made the book a winner in my record.

Yes. I definitively suggest you read it

You would very much enjoy this book. Full of love and a great relationship that it’s so strong that sometimes you wonder… Where the hell did they came from?

“What were we all waiting for? A private meet-and-greet with God/Satan? Our journey to the Golden Gate/fiery depths of Hell?“

“I think faith is never really answered like people think it will be. Because that’s the point of faith – believing with no proof.“

Ok, this is a first one…  *looks at the stars* There is a half star there… Hmmm… interesting, don’t you think?

I gave this book 4,5 stars. Why? Because even though I really enjoy the book, got a hell of a lot of great quotes *smiles at the readers* Because even though I really enjoy the book, the fact that it made me think so much and it was not easy for me to finish it, specially when it was hard for me to pick it back up because I was afraid to cry again… It’s a silly reason to take 0.5 points but it’s my reason for doing so.

Besides that, the book was really amazing and I’m more than happy to have bought it and read it. I probably will be looking at my notes from this book for a long time and re-read some parts that I highlighted 😛