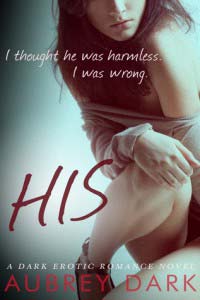 Author’s Note: This is a dark romance novel with mature themes that might make some readers uncomfortable.

My thoughts on His

I finished with this book at almost 2 a.m. and I was speechless. Honest to all that it’s holy that I didn’t know how to express myself about what I’ve just listened too. One word kept going on and on in my head, like a broken record and it was the first out of my mouth: magnificent.

Kat it’s a normal girl that it’s going to college, has a car and works at a library. See? Pretty normal and kind of boring. That’s why her friend dare her, one day, to kiss the first man she feel attracted to… and she does, but she kept it a secret because she asked the guy out and he said he was not interested. She didn’t have a clue that the same guy she kissed and kissed her back so passionately, was dangerous… ticking bomb dangerous.

Gav it’s a man with many layers and darkness inside that leaks sometimes and try to drive him mad, but he found a way to stop the darkness from taking over. The Shadow, as he called it, must be feed with blood. What he didn’t know was the girl that kissed him in the elevator was going to be His.

Let me tell you this is NOT a book for the faints of heart because let me tell you, there are some details in this book that will make your skin crawl if you’re are not able to stomach them… mainly torture and blood… and pain.

When I started listening to this in the audio version I was fascinated. I have a dark mind sometimes and this feed that part of my imagination pretty well. I have read other book with dark themes on them but this was just… no words. Why? I can’t even explain it correctly.

Stockholm syndrome in one of the finest ways, I dare to say. Even thou that was kind of out there to the world to see, I felt like the characters where so well thought out and have dept to them. I don’t know if I would have had the same reaction if I was only reading the book in my kindle but since I got the audio version…

One more thing. Those last 45 to 30 minutes of the audio where just mind blowing and I have to express that I kind of have a crazy envy to for the author because the way she described what was happening was amazing. So vivid!

“Some might say that suicide is for cowards. I dare them to hold a razor to their wrists and say it as they slice into their own flesh.“

“Licking my lips, I took my time. My favorite is the skin on the chest, when it opens up in nice thick slices. Almost like bacon.“

“Incredible, that characters could live so much longer than the people who wrote them. A character in a book might live forever, as long as there was someone there to read him and remember him.“

“The fear of death was a powerful emotion. It dropped away everything else and cleansed people of their sins. Nobody, not even the cruelest man, can hold onto their cruelty in the face of death. It takes away their power, makes them humble.“ 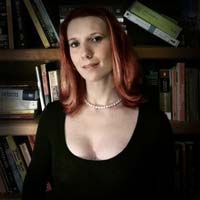 Some authors like sunshine and happy people in love. Aubrey Dark is an author who likes some shadow and fear mixed into her romance. Contrast makes the brights brighter.