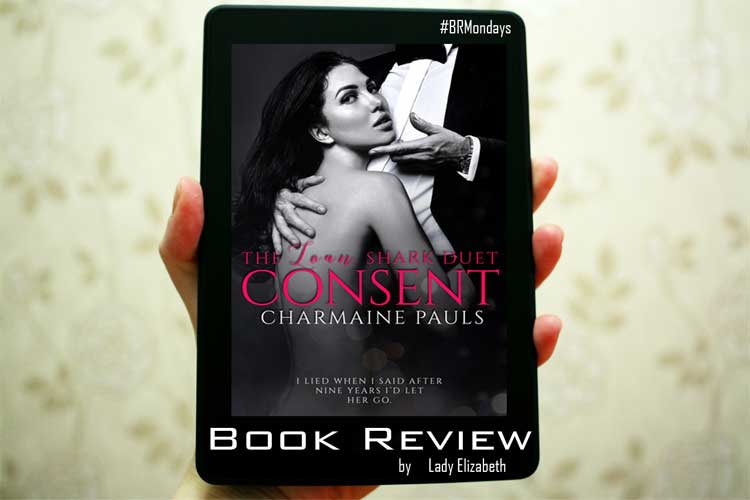 This is Part 2 of the Loan Shark Duet, written by Charmaine Pauls.

Now, if you read my reviews early this week about Part 1, you’ll know that the previous book ended in a cliffhanger, or as I prefer to call it, a very interesting spot.

Valentina has been living as a maid for Gabriel and his family for a while now. Her brother is safe and even though Magda was a bitch to have as a boss, Gabriel made things better. Also, she got close to Gabriel’s guards and that was something that played in her favor when shit hit the fan.

Gabriel and Magda did not see eye to eye when it came to Valentina. I felt or predicted some of what happened, things that were uncovered by shit hitting the proverbial fan. I was NOT expecting the turn of events after that.

I feel like I have to say: If you haven’t read the first book, Dubious, go and read it first. It’s not hard to pick up what happened and understand the story if you didn’t but to grasp the dynamics, you should.

Consent could have been a stand-alone, but I think as the second part for a duet was pretty freaking amazing. The writing was, again, on point like in the first one. No grammar mistakes or anything like it.

I loved the character development in this book. It was so fantastic that made me stay up until 4 a.m. to finish it, and I have no regrets what so ever. Even though the characters became less dark after what happened at the climax, I still think it was the right thing to do, but I would have done it a little bit different.

The ending book of this duet was, I dare say, better than the first one.

I do have one complaint. There is no scene telling Quincy and Rhett the secret she finds out about by the end of the story. I get it. I understand why but it was a little disappointing because I would have loved to see their faces… ok, ok, imagine their faces.

Again, I would recommend this book just like the previous one for those that love mafia romances. Also, go check other books by Charmaine Pauls, she has a few I intend on diving into.

Obs: In case you want the DUET in one nice package, here’s the link to
Complete Duet on Amazon.

Charmaine Pauls was born in Bloemfontein, South Africa. She obtained a masters degree in Communication at the University of Potchestroom, and followed a diverse career path in journalism, public relations, advertising, communications, photography, graphic design, and brand marketing. Her writing has always been an integral part of her professions.

After relocating to France with her French husband, she fulfilled her passion to write creatively full-time. Charmaine has published six novels since 2011, as well as several short stories and articles.

When she is not writing, she likes to travel, read, and rescue cats. Charmaine currently lives in Chile with her husband and children. Their household is a linguistic mélange of Afrikaans, English, French, and Spanish.