Hello, hello… Here I am again and guess what? I have another book review!

This one though it’s a little different because it was not part of my TBR (To Be Read) list or part of the 2015 Reading Challenge like other books. This was just a book that I wanted to read and once I started I could not put it down. 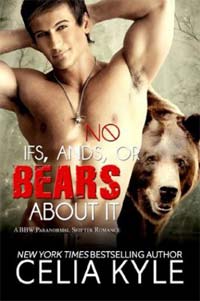 No Ifs, Ands, or Bears about it

Another titles in the series: All Roar and No Bite, Roaring Up the Wrong Tree, Love at First Roar

The first day of Mia’s new life in Grayslake, Georgia is not going as planned. The house her grandfather left her looks ready to crumble, boxes cover every inch of the floor and—oh—there’s a bear cub in her pantry. It gets worse when the cub’s uncle comes by and busts out his fur and claws while on her front porch. Then it gets loads better because suddenly there’s a hot hunk of badge-wearing werebear on her lawn ready to rescue her. Yum. Of course, he has to ruin things by trying to take the cub out of her hands. Ha! The cub is hers… No ifs, ands, or bears about it.

Werebear Ty can’t seem to get the curvaceous, delectable Mia to understand that, even if she is one-quarter werebear, she isn’t keeping the cub. Ty is the Grayslake Itan, the clan’s leader, and the little werebear is going home with him… Unless it isn’t. It’s her smile. If she’d stop smiling and being gorgeous, his inner-bear would support him and Ty would get his way. But the beast wants to make their woman happy, so it’s perfectly content to let her do as she pleases. Then things change. Threats arise, danger comes close, and Ty demands she return to his den. No ifs, ands, or mates about that.

My thoughts on Grayslake #1

I found this book because it was a recommendation on Amazon considering another book that I was just done with that involved werebears. Really people? Werebears?? In my own little mind there was only werewolves but apparently I was wrong LOL.

Mia was a very interesting character to meet but I loved her, specially after she made Parker (a 4 years old little werebear) her own baby and told the werebear leader that the baby was hers and if he wanted to take the cub from her it would be over her decaying body. That was a bold move to make considering Ty was not only the leader of the werebears but also the Sheriff.

The sexy tension between Ty and Mia, the way Parker cling to her like a baby starving for love and how things were getting more and more bloody and complicated made the book great reading. More so when things starting to unfold and let me tell you this, Celia Kyle knows how to come up with stuff that I was NOT expecting as plot twist and turns. She left me, more often than not, with my mouth open because of what was happening and thinking: I did NOT see that coming, damn it!

I won’t give any spoilers, at least no more than I already did, right? *looks to see if she did and sigh* I didn’t… Good. But going back to what I was saying. I would love to share with you some stuff about the books but anything I think to write it’s a little more spoiler than the tought before it so… Nop.

What I can tell you is that this book it’s part of a 4 book series and I already finished all of the books. I could not stop reading, I swear! I’ve never thought that I would be so much in love with bears being shifters but what can I say? I’ll probably ditch a werewolf for a werebear anytime now hahahaha

[ In one of the chapters, Mia it’s sitting with Ty on a meeting with his brother Van and they were discussing something about Parker’s future while Ty was “distracting” her. Then he asked her if she was ok with what they say and kept distracting her, not letting her think clearly *cofkissingcof* And she stopped him and told him that she was not Ok with whatever they say and I quote: No, stop that. Bad furball. Mind you that Ty it’s the town sheriff and werebear leader and she told him that! ]

This was a book that I was not expecting to have such a fun reading, but oh man I did. I was laughing and with a smile on my face most of the time. The story it’s well written, the fight scenes and the romantic scenes are pretty great. And don’t get me started with the “shit of crackers” and the “language” that you will read a lot in this one.

A great love story, paranormal shifters romance. I was not expecting werebears, I did not tought of werebears before, only wolf shifters but now…

Now I have a THING for bears!

“No ifs, ands, or bears about it, his furry butt is staying right here. Possession is nine tenths of the law and all that“

“If you or that man try to take him from me, you’ll get a rear end full of buckshot and I won’t send you a get well card“

“No, stop that. Bad furball“

My rating it’s 4 stars for this book. I wish I could give it a 5 but even though I love this story, it was greatly written, fun to read, with a lot of curve balls and action in a lot of ways… I can’t give it more because I only give 5 stars to stories I die after I’m down with them and want to live in the story myself, so…

I won’t deny that I loved the book, yes, I did. I finished it a day so I can’t complain and I jumped right into the next book of the series after it.

I have to warn you though. It’s not such a light read if you want to keep up with the story, the romance yes, the whole story plot no, it’s not so easy. That said, there is no strange words and if they are (like Itan or Itana) the author explain them through the book so there is no problem at all.