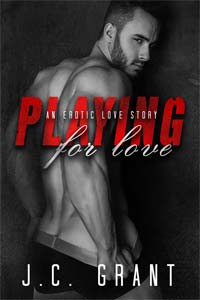 Austin James is mine.
Mine to take care of.
Mine to spoil.
MINE.
The first time I saw her, I knew she was MINE.
I saw a reflection of myself in her.
Broken. Damaged. Guarded.
I can’t explain the depth of my feelings or why it happened so fast.
I just know she’s mine and I’ll do anything to keep her.

My thoughts on Playing for Love

Warning: This probably, has spoiler information.
You’re been warned.

Right from the start I have to admit I was pleasantly surprised with this instalment of Austin & David love life. I mean, he got what he wanted with her, he always do and probably always will be, right?

Not only the overall story was real good, I also felt like J.C. Grant read my review from last year on Playing for Keeps and maybe, just maybe… *blush* I’m not trying to feed my ego here, but maybe she took something from it… Or she already had a plan of what she was going to do with this book, which is also a strong possibility.

The point that I was trying to grasp is that I found a big improvement in the writing of J.C. Grant, at least from my point of view. She not only improve on the writing front, she also made the characters have more depth or show their depth more, I don’t know how to explain it correctly.

In the first book, and this is only my personal opinion as a reader, the characters didn’t feel so relatable because they lacked an element of realism, for me. When they talked about their backgrounds to one another, the shock ingredient was a little lacking. On this book however, I saw plenty and in the right places.

We get to see so many things on this couples life that I believe we’re following them into their marriage. Having exclusive access to their thoughts and feelings. What was really going on behind some situations and how they handle said situations. The fights, the emotional battles, those things you don’t get to see, because usually people hide it from the public eye.

I got to really understand why Austin was the way she was, even if I knew her background from the first book. This time I got to see the real Austin, a woman with scars that actually are keeping her from reaching her true potential self, from being truly happy with the man who stole her heart… and phone *laughs*

David was already the character the readers loved. Just go to J.C. Grant Instagram and you will see what I mean by that. He’s fucking hot. In this book he got to show not only that the stalker behavior had a meaning behind it, but also the soft side of him, and of course his dominant side. There was a reason why he did what he did. Of course he made some mistakes in this book but I can understand him *so she says with a soft sigh*

It was hard for me because I felt like my brain was going to burst, trying to keep up with a lot of information and emotions. Why she did this. Why he did that. There is a reason why she reacts this ways and I get it. I don’t understand her!

Honestly, Austin got to me sometimes, on a bad way. I understand her in some points but in others I just don’t get her. She says things like she need him to take control because she is suffocating from having to control herself all the time. She is talking about her emotions of corse. Then she goes and gets mad at him because she wants space and independence to make a career for herself. She said to him that she wants to be able to pay her own bills even if she is married to him.

As a woman, a university student, a writer, I understand her need to be able to support herself, to have that as a safety net in case things with David don’t last. On the other hand I want to shake her because she is just… Arg! I swear to you that I thought at some point she was pregnant and it was the hormones talking. If David got on my nerves on the last book, this time was Austin.

Before I finish with this review I have to say: J.C. Grant thank you for sending me the ARC copy of Playing for Love. I throughly enjoy it. You’ve made an amazing job with David and what’s her name story *laugh softly because she actually don’t remember the girl’s name most of the time, only David’s*

Now… Lastly… I hope *makes a prying gesture to the sky before going on* That the next book it’s on the makes because AGAIN… seriously… J.C. Grant, that ending… that ending was just… I want to know more.

“I’d never let her go. I’d do whatever it took to make her happy, even if I had to tie her up and wait for Stockholm Syndrom to kick in.”

“This love shit was fucking intense.”

“Being mean to him is like kicking a puppy.”

“Now I understood that wasn’t jealously she was feeling when Dawn called, at all. It was devastation. It was who she thought I was, what she thought we were, shattering into a million pieces. The kind of hurt and betrayal that made her not want me.”

“I knew deep down she wanted me to take her, needed me to. Needed me to force her to submit, to take control of all those emotions she couldn’t handle. She was spiraling and it was my job to take care of her. And my instincts hadn’t been wrong with her yet.”

“The emotions, the stress, everything I had been struggling with uncoiled with each painful thrust. It was insane but the pain freed me from my internal chaos.”

“Sex is how we communicate, sweetheart. It keeps us level, keeps us on the same page. I always know where you are emotionally when I’m inside you.”

“I missed the fuck outta you today.” 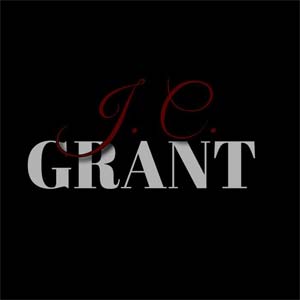 J.C.Grant was born and raised in Oklahoma City. Currently living in LA with her rescue dogs.
She writes super sexy Romance Erotica about Alpha males and the women they love.