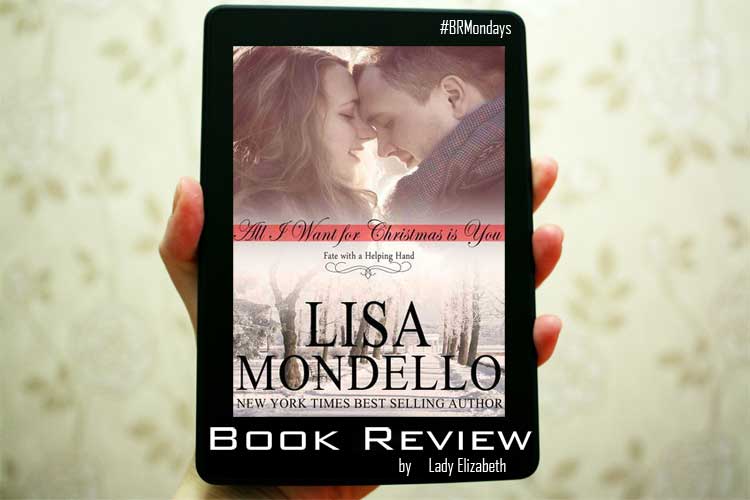 Santa Claus is going to have a rough season… Lauren Alexander is raising her daughter alone. Abandoned by her family for her decision to keep her daughter Kristen, she has done a pretty good job for the last six years. Or she thought she had. That’s why she is crushed when little Kristen gives up her wish for a toy or goodie and instead asks Santa for a present for her mother. She wants Santa to bring a Daddy. Delivering Daddies isn’t Santa’s bag.

But this Santa has a plan…

Kyle Preston knows what it is like to be abandoned too. Luckily he found the support of loving adoptive parents and has turned himself into one of the most successful Real Estate developers in town.

Building a house is easy. Building someone’s trust is a whole other story. But with a little helping hand, a little Christmas magic can make all the difference in the world.

WARNING: This review has SPOILERS.
Read at your own risk.

I’ve had this book on my kindle for long time (since December, 2015) and since I read the prequel: The Gift; and love the ever-loving shit out of that book, I dived into this story literally the day after finishing The Gift. And I can’t be more happy with what I end up reading, even if I try.

Lauren is a single mother that has been through a lot to raise her daughter in the best way possible. She alone and fighting every day to do was best for Kristen. This year her efforts are not enough to buy her daughter her dream doll house but she will do what she can to make Christmas the magical time of the year for Kristen. That includes taking her to see Santa at the mall.

Kyle is the owner of the mall they go to meet Santa. In fact, he is dressed as Santa for the children and it’s the one reading Kristen letter telling him what she wants for Christmas. That is a wish that Kyle can’t fulfill, no matter how much he want to give the girl what she asked for, in fact, he’s not even sure Santa can give her what she asked for.

This book is well written with not use of flourish language. It’s a great holiday read and even if it’s not Christmas time, I believe it to still be a good read. Why? Because it shows a side that I love about a girl loving her mom more than she wants a doll house.

I have to say I was pleasantly surprise when the author stick to the development of the characters relationship instead of the other things she could have focus on. The way the relationship between Kyle and Lauren got to grow into what it was at the end, it was such a romantic and fresh journey. That being said, keep in mind I read erotica like there is no tomorrow, so this is really a refreshing read for me.

The characters felt so real that I found myself agreeing and nodding in certain parts of the book. In other parts I was rolling my eyes because Kyle was such a guy in some of the things he thought or did. Even Lauren had a mentality about men that reminded me of my own sometimes.

What I love the most about this story? Kyle showing that even when he was a guy and his body wanted to fuck Lauren against the wall, sort of speak, he managed to back of and hold on to that until the time was right and the relationship was at a stage that seemed reasonable and real to finally give into those desires. He showed self-control.

You probably are looking at me like I’m crazy right now, right? I’m not. I have read so many books when the guy acts on his sexual instincts so fast that I just end up thinking: wait, they have just literally meet 5 minutes ago. It’s not a bad thing, don’t get me wrong. I read those books because I like the sex but it’s surprising to read this kind of story, like Lisa Mondello’s right here, that reminds you: Oh, yeah. Guys can really wait and don’t act like a crazy sex best too.

What I didn’t like? Or I rather say that it made me think it’s was not supposed to be in this book, considering how things developed, was that Kyle got instantaneously over protective of Kristen and Lauren at the mall. For me it was too soon but that it’s only my personal opinion and doesn’t alter the fact that I liked this book a ton.

To finish this long, crazy review… I have to say that I will be reading the rest of this Fate with a Helping Hand series by Lisa Mondello soon. Because I just love the story telling too not do so.

New York Times and USA TODAY Bestselling Author, Lisa Mondello, has held many jobs in her life but being a published author is the last job she’ll ever have. She’s not retiring! She blames the creation of the personal computer for her leap into writing novels. Otherwise, she’d still be penning stories with paper and pen. Her book The Knight and Maggie’s Baby is a New York Times Bestseller. Her popular series includes TEXAS HEARTS, DAKOTA HEARTS, Fate with a Helping Hand and the new SUMMER HOUSE series. Writing as LA Mondello, her romantic suspense, MATERIAL WITNESS, book 1 of her Heroes of Providence series made the USA TODAY Bestsellers List and was named one of Kirkus Reviews Best Books of 2012.